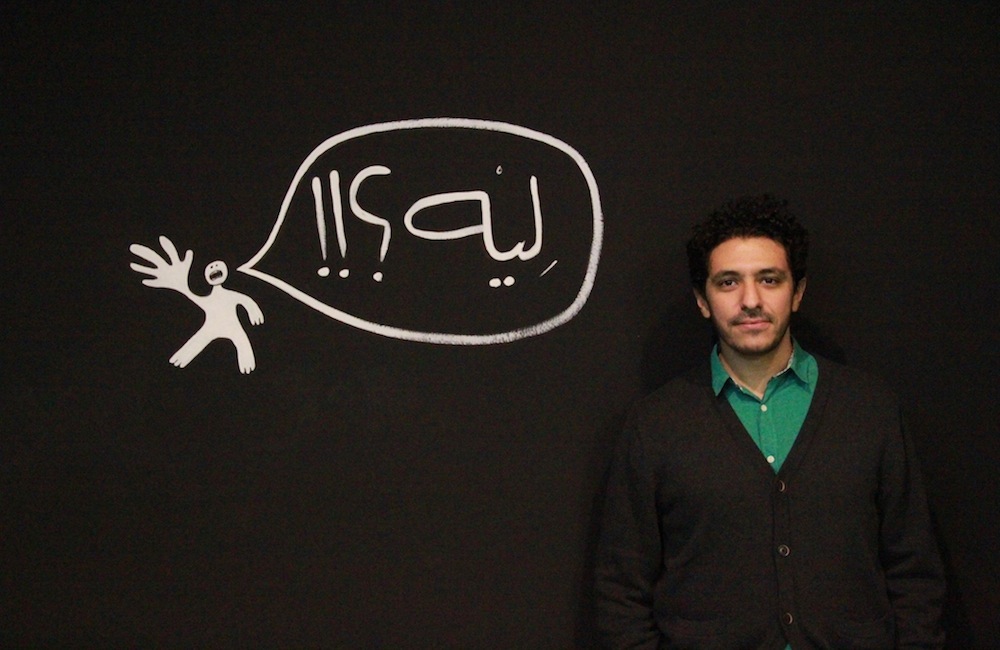 Despite Egypt’s authoritarian climate, a two-month contemporary art event billed as the Off Biennale Cairo endeavored to bring together young artists with the international art scene. "Something Else" marked an important moment in Egyptian contemporary art.

Cairo’s cultural scene after the fifth anniversary of the January 25, 2011 Revolution exists in a climate of uncertainty. The popular Downtown contemporary art space Townhouse and its adjoining Rawabet theater were closed for two months following a multiagency raid by the Egyptian authorities on December 28, although its offices and library are to reopen this week. The raids also included Merit Publishing House, well known since its founding for publishing experimental works and those by first time authors, and Studio Emad Eddin’s performance arts center, although both spaces in Downtown Cairo remain open. In such an atmosphere, the first edition of Something Else seemed like a valiant undertaking, not so much for its critical art, but for its attempt at creating a recurrent annual international event given the conditions and a lack of a cultural support infrastructure.

“The Cairo Biennale hasn’t been held since 2010 and kept being postponed so we decided to do something else, which is where the name comes from,” explained artist Moataz Nasr, who initiated the event held primarily at the Darb 1718 multidisciplinary art space he founded in 2008. Alternative events have historically accompanied many large-scale international art exhibitions like biennales, which may challenge the larger show’s practices or deal with neglected issues. “The theme is flexible because we wanted the curators to bring something different,” he said of the exhibition, which was extended an unplanned month through January at Darb 1718. “We also wanted the international artists and curators to mix with Egyptian artists, especially younger ones, because the Cairo Biennale typically protects the artists in a way that they never really interact with the public and unknown artists.”

Something Else was an ambitious event of exhibitions, performances, film screenings, music and talks, featuring the work of what seemed at times like an overly ambitious 128 artists from more than 20 countries and 9 curators. Although the majority of the artworks were exhibited at Darb 1718, other pieces were shown at historic locations around Downtown Cairo in December. Noticeably missing compared with other large-scale events, however, were exhibitions at any of the city’s other independent galleries or state-run museums. Like all big shows, there was a variety of art on offer, the provocative and sometimes unremarkable, from visual arts to site-specific installations and video and sound art.

The best pieces were on display at Darb 1718 in Old Cairo, surrounded by artisan and ceramic workshops, where it’s not uncommon for people living nearby to also stop by for a look. “In the beginning, we showed contemporary art, but over time we’ve become more of a cultural center hosting children’s activities and workshops and that has gained us the trust of the neighborhood who accept the space now and come to our openings,” Nasr said.

“The City Goes Pop” a mixed media piece by Egyptian artist Huda Lutfi at Cairo art space Darb 1718 juxtaposes images of Downtown’s Khedivial era architecture with modern concrete buildings, people and mannequins, part of a larger series of works focusing on mannequin popular culture in Cairo, where shop windows can seem like theater plays. The mannequins walking the high wire are a kind of comment as to the fragile state of things in the city.

Egyptian artist Tarek Kamal’s “The Wall” stands alone in a corner space at Cairo’s Darb 1718. A print work with a soundtrack by artist Amr Darwish.

Despite the quality artwork on show from around the world, the viewer was most captured by the work of Egyptians that interacts with the surroundings or raises questions beyond those of the international art scene hungry for political art from the region. Bassem Yousri’s minimalist piece disrupted the exhibition in a way: A cartoon-like figure with an elongated arm holds his hand up as if to say “Stop”, while “Why?!!” is written in Arabic in a dialogue cloud above. “I wanted to invite the viewer to be critical, perhaps even of this specific show,” Yousri explained. “My characters are symbolic of the human condition generally without gender, nationality or ideology so they’re as open as possible to the viewer’s interpretation, and in this case I instigate a question rather than provide a statement.”

Two other Egyptian artists, Alaa Abdelhamid and Youssef Limoud, created their neighborhood-like installations completely on-site at Darb 1718. Limoud’s nearly three-meter-long piece “Maqam” was made up of materials collected in the streets around Cairo. “I wanted to create an imaginary city representing something else,” he said. Young sculptor Abdelhamid’s “The Symphony of Cairo”, however, was a more realistic portrayal of the design-less redbrick informal architecture that is characteristic of many Cairo neighborhoods. Abdelhamid’s bricks buttress concrete columns with steel rods reaching into the air, mimicking how families typically add floors to their buildings when space gets tight.

Another striking work that interacted with Egyptian society in a visceral way was that of Cairo-based Egyptian-American artist Amanda KM. Her piece “Filtered Conversations at Roundtable” resulted from a project that brought together small groups of women for a total of 33 conversations held from July to November 2015. “The idea of the roundtable was to have a place where people could speak openly without fear of being judged,” she said of her sessions, which in some ways seemed like group therapy in a country where seeking mental health care can be a taboo. The work assembled 300 cups used at her roundtables into a circle measuring the circumference of the table at which they sat, positioned at alternating heights to resemble a sound wave – the women’s voices in conversation.


A piece at Darb 1718 by the Cairo artspace’s founder Moataz Nasr. The road sign reads “Freedom of Expression 3000 Kilometers”.

Something Else was envisioned as more than an exhibition, but as an exchange between Egyptian artists, curators and their international counterparts. “The discourse is hardening around a lot of issues in Europe, so the best statement we can make is to be part of this collective effort where art has the ability to understand the interconnectedness of humanity,” said Juan-Pedro Fabra Guemberena, a Berlin-based Uruguayan artist who co-curated one of the exhibitions featuring Central and South American artists. Joining the international curators were three twenty-something French volunteers who came to take part even after the November 13 terrorist attacks in Paris. “Many people back home were afraid for us to come here,” 21-year-old Valentina said. “But we feel really comfortable in Egypt and we wanted to know what was happening in this part of the world and to meet young people here,” she added.

A photograph by Tunisian artist and lawyer Héla Ammar for her series “Identities” challenging conventional social, political and religious references.

30-minute performance “Moving the Lifeline Along” by Mwangi Hutter from Germany.

One international artist who really interacted with local artisans to realize her Something Else piece was Swiss-Belgian Sandrine Pelletier. Her piece “The Deserted” was made up of seven white wooden pillars representing museum exhibition stands, each topped with melted sheets of glass. “These very simple classic columns were combined with the idea of chaos, introduced by melted glass and burned wood, a reflection on how Egyptian contemporary art is facing ancient and clichéd art,” she explained, a reference to the challenge Egyptian artists contend with in producing critical art in the face of both a state-sponsored and international scene that often reduces artists to stereotypical images of the country.

One of Something Else’s parallel events was AtWork, an educational workshop for young Egyptians that sought to encourage critical thinking among its participants co-conceived by Something Else head curator Simon Njami. The workshop was a step toward establishing a hoped for academy for art and creative thinking at Darb 1718. One of the AtWork participants, 21-year-old engineering student Islam from an outlying Cairo district, said the event was about much more than art to him. “People are too specialized and isolated here and this workshop gave me a chance to expand my thinking,” he said, discussing how he’s interested in psychology and using art therapy to help young Egyptians.

For all its activities and noteworthy art, however, Something Else was challenged by its lack of financial resources and a larger cultural support infrastructure. The event was possible in part because of in-kind contributions from Cairo-based local and international institutions like Al-Ismaelia for Real Estate Investments, which provided exhibition spaces in some of its historic properties. “Since we began our work in 2008, we’ve been providing spaces for artists and art institutions and we intend to continue doing so in our buildings,” said Al-Ismaelia Chair Karim Shafei. “But we would be interested in creating an arts board for Cairo with other stakeholders, although none have been successful so far,” he added.

The most striking piece in one of Al-Ismaelia’s buildings was “Table for Two” by Egyptian artist Haytham Sherif where a figure in a glass vitrine stands opposite a table and chair in a kind of cinematic scene that invites the viewer to sit and write a message. Like many of Something Else’s artworks, the piece invoked the universal human condition. “This is a very emotional work and I wanted to share that with people,” Sherif explained of his figure that took him three years to finish. “People dealt with him as a human being, rather than as a statue or representative of something, and in their letters many left long notes where they talked with him openly and freely.”

More than anything, Something Else presented an important moment in Egyptian contemporary art, its relation to state institutions, and the struggle of independent artists and art spaces to innovate in a cultural environment as complex as this one. “Everyone was doing more than they could because of a lack of resources,” Nasr said, while adding he hopes Something Else will be a recurring annual event. “Despite everything, the lack of funding and the situation in the country, we succeeded in making this happen and Egyptian artists showed their work, which we hope will open the door to more cultural events because we need more festivals and international artists to come here from around the world to change something.”

All photos credited to Angela Boskovitch