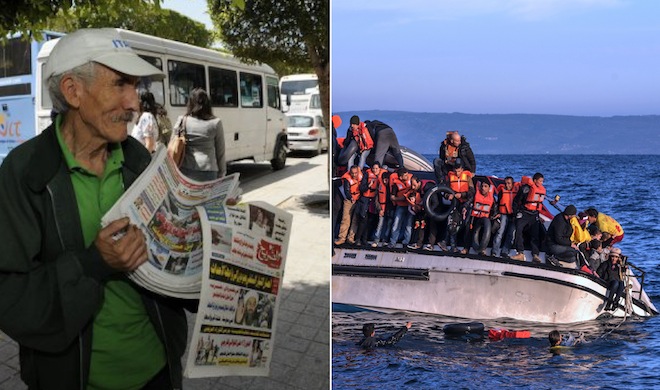 The ongoing global migration crisis, fueled in large part by conflict in Arab countries, has featured prominently in Western media, and much Arabic media coverage of the crisis does not differ greatly. Headlines in MENA countries hosting Syrian refugees express concern over the burden of doing so and fear of terrorism. Other coverage describes the humanitarian work being done in the region by NGOs and governments and the difficulties and tragedies faced by refugees.

The crisis has partly been created by the ongoing conflict in Syria. Pro-government Syrian media seems keen to emphasize the threat refugees pose to Western countries and claims the crisis is the result of Western support for terrorist groups. A few headlines from the major dailies al-Watan, al-Thawra, al-Tishreen, and al-Ba‘th include:

“Terrorists Make Their Way into Europe in Guise of Refugees”

“The West Creates Terrorist Organizations to Achieve Its Plans in the Region, A British Doctor Incites to Join ISIS, and Austria Stops Accepting Refugees”

“American Economist: The Flow of Refugees Might Break Up Europe”

Like Western media, Arabic media also discusses the social and cultural implications of the migration crisis, but with greater focus on the perspective of the migrants and the region they left behind. There is also more attention to individual tragedy, as seen in a report on the death of an emerging Kurdish celebrity. A few other interesting themes emerged as well: for instance, provocative Western rhetoric against migrants has been reported on. An article from arabianbusiness.com reports comments by an American politician about her desire to shoot Syrian refugees. Finally, while many are worried about ISIS militants disguising themselves as refugees, the Saudi Arabian outlet Al Arabiya reports on other unsavory characters taking advantage of the crisis.

‘The Syrian Refugees in Europe and Questions of Religious Reform’

“The relevance of the search for a religious discourse has increased with the sheltering of the Syrian refugees in Europe, where the possibilities for conflict and the sparks of discord are present. A few days ago, we read about a clash in Germany between some refugees because of a matter of Fiqh (Islamic jurisprudence), while the British Prime Minister David Cameron is eager to encourage and facilitate a religious discourse that corrects the refugees’ understanding of Islam and pushes them to values they did not know before, principally the topics of tolerance, integration, and co-existence.

“The coinciding of the rise of the extremist organizations on the one hand, and the surge of the advance of the Syrian refugees in Europe on the other hand, constitutes exceptional room for concern, unprecedented since 2001. The newspapers and channels speak daily about the topic of terrorism and religious discourse, the manaaber (Islamic pulpits), and clerics. This grants Muslims and their leaders a great opportunity to put in place a project (which will not be easy) to absolve religion of terrorism and to address other nations about that issue. This is not impossible, for the nucleus of this reform started during the wave of Arab enlightenment in the last century. We must begin this effort lest the description of our region, of death and blood and terrorism, be proven true.”

“The news of the explosions in Paris, which on Friday evening resulted in 129 dead and 300 wounded, was an unwelcome guest in the day of Syrian refugees in Sweden. The international and popular reaction of condemnation, ISIS’s claim of responsibility for the operation, and the appearance of a Syrian passport in the possession of one of the perpetrators transformed the news circulating in the media into a serious issue that touches on the concern over the presence of migrants.

Confusion and fear of their future here were the core of refugee discussions. Most of them took to social media networks in a show of solidarity with the victims, as well as to deflect suspicion away from Syrians. Some Syrian women have even come to think seriously about not wearing the hijab. The situation is similar among men, who may not grow their beards, fearing the reaction until the public outrage, which the explosions created, recedes.

“Arwa, 30, is a Syrian journalist and translator residing in Sweden. He said to Huffington Post Arabic, ‘The war raging in Syria, the preconceived categorizations, and the superficial knowledge of the reality and divisions of Arab societies have today come to push Europeans to build a preconceived picture to apply to all those coming from Syria. They often rely on a group of superficial signs in judging us.'”

“The body of the young Kurdish artist from al-Sulaymaniya province, Alan ‘Ali, was found yesterday Tuesday after his drowning in the Aegean Sea.

According to one of ‘Ali’s friends (…), ‘Alan was in Turkey for several days and he wanted to emigrate to Europe, but he disappeared since the 25th of last month’, adding, ‘After that, they informed us of the news of Alan’s drowning in the Aegean Sea with a number of other migrants who wanted to cross to the Greek island and died after their boat sank’.

Alan’s friend clarified, ‘His body was found on February 2, 2016 and it was decided to return it after several days to al-Sulaymaniya. Alan’s mother suffered a heart attack after hearing the news and she is currently in the hospital.’

Alan issued a music video and participated in the competition program “X Kurd Like” and succeeded in passing several stages in the program. The company Babylon, which officially sponsors the program, expressed its condolences for the incident on the social media site Facebook.”

“An American representative of Nevada threatened to kill Syrian refugees during a radio program (…). This came following a question about her stance on the refusal of Republicans to welcome Syrian refugees in the United States.

She stated: ‘I am about to go to Paris and shoot them in the head myself. I’m not ok with Syrian refugees and I’m not ok with terrorists. I’m OK with putting them down, blacking them out. Just put a piece of brass in their ocular cavity and end their miserable lives. I’m good with that.'”
(Ed. note: This is the actual quote as reported in several American newspapers; it differs slightly from arabianbusiness.com’s translation into Arabic.)

‘Assad’s “Shabiha” among the Syrian Refugees in Germany’

“Last Friday, the German channel RTL presented a television report documenting the presence of members of the Syrian regime’s security apparatus who used to torture prisoners in Syria among the applicants for refugee status in Germany.

The report pointed to what are described as the Assad regime’s “lashers” residing in refugee shelters ‘without legal prosecution’. The channel said that its correspondent Antonia Rados found some of these, who the Syrian opposition calls ‘Shabiha’, in refugee centers in Germany and spoke with them. The German station Deutsche Welle mentioned that the report documented that the ‘Shabiha’ are ex-convicts and sentenced to prison in Syria for many long years; however, their work for the regime lightened their sentence, and they fled to Germany after their release.

Syrian activists established a Facebook page devoted to exposing pictures of the ‘Shabiha’ arriving in Europe, under the title ‘Criminals, not Refugees’.”