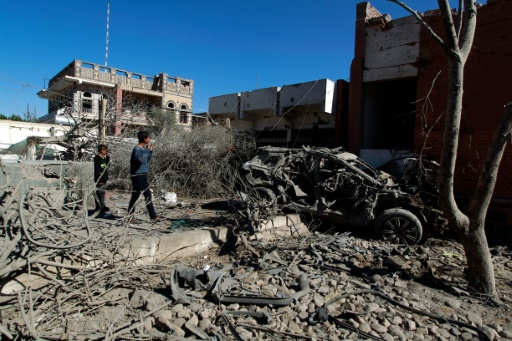 Amnesty International called Monday for an arms embargo on all warring parties in Yemen, including the Saudi-led coalition battling Iran-backed rebels, ahead of an Arms Trade Treaty meeting in Geneva.

The rights watchdog said it has documented violations of humanitarian and human rights law, including possible war crimes, by both sides since the Yemen conflict broadened in March last year.

“Amnesty International is urging all states to ensure that no party to the conflict in Yemen is supplied –- either directly or indirectly –- with weapons, munitions, military equipment or technology that would be used in the conflict until they end such serious violations,” it said in a statement.

The group called “for any authorisation of arms transfers to any party to the Yemen conflict to include a strict, legally binding guarantee that the end use will be in line with international humanitarian and human rights law, and that such arms transfers will not be used in Yemen”, it said.

“The embargo call goes far beyond existing international sanctions on parties to the conflict in Yemen,” it added.

A non-binding European Parliament resolution adopted on February 25 “called for the EU to seek to impose an arms embargo on Saudi Arabia, but not other parties to the conflict”, Amnesty added.

But Amnesty said it “is not calling for a total ban on coalition members acquiring arms lawfully for legitimate uses outside Yemen -– for example, arms used for the protection of humanitarian aid or participation in peacekeeping operations”.

The United Nations warned this month of a “human catastrophe unfolding in Yemen”, where it says more than 6,100 people had been killed in the fighting since last March.

It says another 3,000 people had been wounded and 2.5 million people forced to flee their homes.

In March 2015, Saudi Arabia began leading a military campaign against the Shiite rebels and their allies in its southern neighbour.

The Arms Trade Treaty, an accord laying down international rules for the global arms trade, entered into force in December 2014.

It compels countries to set up national controls on arms exports. States must assess whether an exported weapon could circumvent an international embargo, be used for genocide and war crimes, or be used by “terrorists” and organised crime.