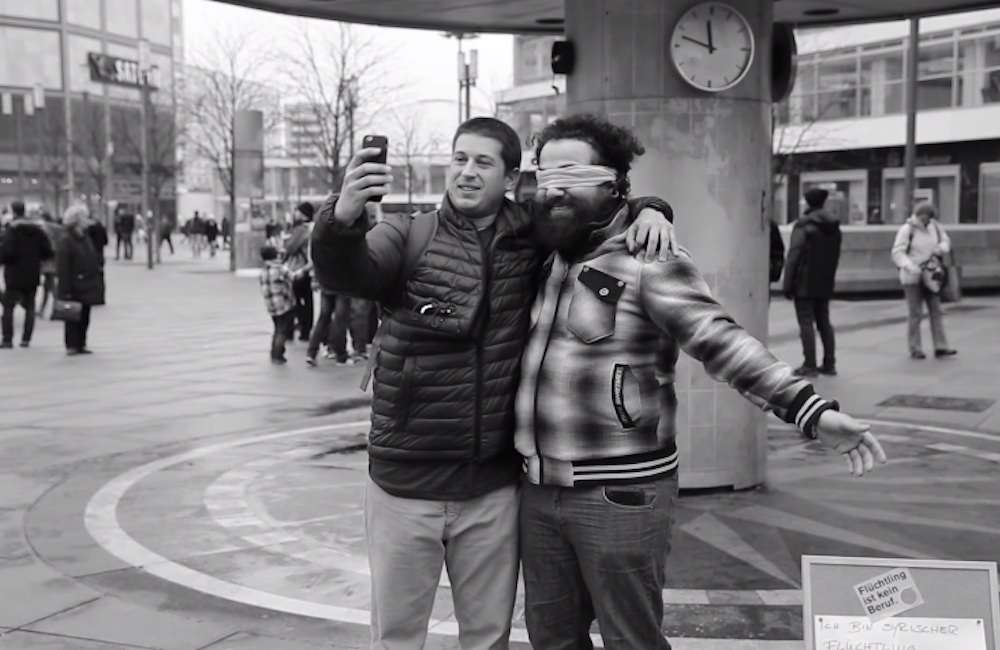 Art is a powerful means of expression, both in times of peace and war. While the scene in Syria has become blurred with the emergence of armed extremist groups and the atrocities of a bloodthirsty regime, art remains a meaningful weapon against all darkness. Not the least for the Syrian diaspora.

Fleeing from a war-torn country, many Syrians sought refuge in European countries, most notably in Germany. As the discourse around refugees has ranged between supporting and rejecting the settlement of newcomers, there have been many negative stories circulating, such as the generalisations after the New Year’s Eve sexual assaults in Cologne, or the bullying of young refugees in a Munich subway. Indeed, parallel to the German Wilkommenskultur, we have also seen narratives against refugees in Germany, which reflect the fear among a significant segment of the German population: many say, refugees are going to affect the welfare in Germany because they must be provided with financial and social aid. And that costs a lot of money.

Witnessing the largest exodus in recent history, it seems perhaps irrelevant to focus on art. But I believe neglecting art is the first step in the wrong direction.

In October 2015, a group of refugees – mainly Syrian artists in Germany – organised a campaign under the title “Thank you Germany” in an attempt to thank Germans for their hospitality of receiving tens of thousands of Syrian refugees in their country. Monas Bukhari, a Syrian artist and the founder of a socio-cultural group called “The Syrian House”, said to the German Press Agency: “The campaign aims at producing a photo book and opening exhibitions for Syrian photographers residing in Germany as a kind of appreciation for Germany’s generosity.” While hundreds of Syrians joined the campaign across Germany distributing red roses to locals, many Germans in return found the initiative as a sign of good faith.

In cooperation with more than 100 Syrian artists within and outside Germany, the group plans on organising a photo gallery in Berlin for Syrian photographers.

The exhibition, which goes under the name “Smile Of Hope”, will host the work of Syrian photographers still residing in Syria in order to change the gloomy picture formed in Europe towards the refugees and their homeland.

On a different occasion in early February this year, Syrian refugees participated in the celebrations of Rose Monday Carnival in Cologne. The Syrians wore local traditional clothes and danced to the tunes of popular German music. And Syrian folklore bands such as “Sham Band To Revive The Heritage Of Damascus” and “Kurdistan Band To Commemorate The Kurdish Folklore”, organised by the Educational Centre for Human Rights in Wuppertal, joined the festival to play musical instruments and sing Arabic and Kurdish songs.

At a time when xenophobes and far-right groups claim the futility of integration programs, usually by arguing that Middle Easterners are inclined to be extremists planning to take over Europe, signs point exactly toward the opposite. But no matter what the discourse around refugees in Germany is, a song wins the debate. In cooperation with musician-activists in Bremen, Syrian musicians who fled the civil war built the Expat Philharmonic Orchestra to give back to their new community.

Double-bass-player Raed Jazbeh, who fled to Germany three years ago, embarked on a journey to get a small group of Syrian musicians together in Bremen. This has developed into an orchestra, which combines songs from Syria and European classical music. The orchestra is composed of Syrian and local musicians, defying the rhetoric of fear mongers.

“With music we can liberate ourselves from all the designations,” said flutist Fadwa Merkhan to Occupy.com. Merkhan played in the orchestra’s first performance on 22 September 2015 at Sendesaal Theatre in Bremen. The orchestra performed classical, jazz and Syrian music at its premiere.

Musician and singer Ribal Al-Khudri is another example of a Syrian who found a safe haven in Germany. In his current project “Arabesque”, Al-Khudri says that he aims to build cultural bridges between people through music.

These young talents are trying to express the pain of Syrians with a song and to draw a beautiful image of cultural Syria, beyond the violence portrayed by the media. It is, of course, true that the reality in Syria is dominated by war. But it is also true that Syria has a rich culture. These are not only refugees, but also artists.

A Syrian filmmaker, who is currently a refugee in Germany, turned into a YouTube star after he had cleverly dealt with the issue of integrating refugees. While the German society is struggling to understand the refugee crisis, the young Syrian Firas Al-Shater – who speaks decent German – humorously highlights the habits of German people from the perspective of a newcomer. Through comedy and light humour, Al-Shater is trying to bridge the gap between Syrians and locals and to come a step closer to the German people.

On 28 January 2015, Al-Shater aired the first episode of his video series called “Sugar”. While his videos are funny, witty and down-to-earth, Al-Shater tells stories about his personal experience and his desire to learn more about Germans.

In one of his videos, Al-Shater talks about an experiment he carried out at Alexander Platz in Berlin, in which he held a sign saying: “I am a Syrian refugee, I trust you, do you trust me? Hug me!”

The experiment appears to be an imitation of a video made by a Muslim Parisian YouTuber following the terrorist attacks in November 2015. At the end of the video, Al-Shater points out that in Germany it takes a little longer for people to show emotions, but once they do so, they won’t stop.

In 2011 at the beginning of the Syrian uprising, tragic tales of painters, singers, actors, poets, writers and other artists, most notably the torture of the cartoonist Ali Farzat who was savagely beaten by regime thugs for satirising Syrian leadership, prompted many artists to flee their country. A great number of them arrived in Germany and other European countries. While some had to go through the tough asylum procedures, others made it through art-scholarships.

In December 2015, Syrian painter Hussam Sarah opened his first caricature exhibition in the German city of Bonn, under the title “Comics From Syria”. The exhibition included 30 paintings to tell stories about different aspects of Syria.

Through his art, Sarah said that he wants to deliver two messages to the Germans. The first one is political by inviting the German people to put more pressure to end the conflict in Syria. And the second is to show that Syrian refugees are not amateurs. Syrian refugees can effectively contribute to and enrich the community in which they live.

Yet another example is the Syrian painter Abdul-Razzaq Shablot, who received a Heinrich Boell foundation scholarship for arts and came to Germany in October 2014.

“As an artist, I have to paint to feel alive, and in order to do so, I had to escape Syria,” he told Deutsche Welle.

Stories like these are numerous, and are likely to increase in the coming years, which will hopefully make the number of passive refugees insignificant. In fact, those who made it are not only trying to share their talents with their European counterparts, but are also seeking to show the tragedies of war, raise awareness and promote peace.