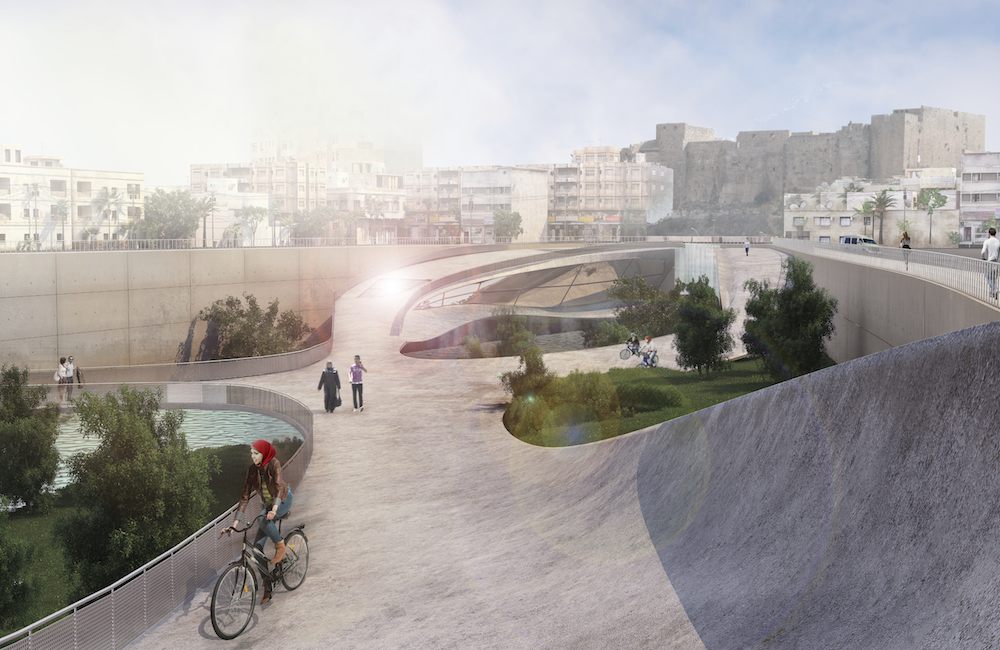 One young architect is trying to build a better Tripoli for all. But in Lebanon, investing in public space is not an easy sell.

Tripoli, the capital of North Lebanon, is a city with a rich narrative of discovery and recovery. Its landmarks, souks, ports, boundaries and thresholds speak a language of past and ongoing social and political events, achievements and struggles.

Tripoli in 2016 continues to be a city living on the edge. The risk of battles for political power turning into violent clashes is real. The city’s recent densification with refugees and the continuous presence of opposing clans, not least due to the war in neighboring Syria, has pushed forward the deterioration of social cohesion.

The role of public space – and therefore of an architect who designs these spaces – becomes essential in struggling cities. Christina Attiyeh, a young member of my Lebanese family, graduated in 2015 with a bachelor of architecture from the American University of Beirut. She now works for a Beirut based architectural firm. While currently solely working on private projects, Christina Attiyeh took an interest in public architecture when she prepared her bachelor thesis.

In her thesis entitled “Narrating Spaces: from the narratives of Tripoli’s urban dwellers to mediums of space”, Christina Attiyeh studied the case of rethinking the public space in Tripoli’s Abu Ali river area. Abu Ali is one of the city’s most significant dividing lines. To its east there are the neighborhoods of Bab al-Tabbaneh and Jabel Mohsen, major hotspots for Tripoli’s inter-sectarian skirmishes. On the western side of the river, one finds the Tripoli citadel, the neighborhood of Abu Samra and the old souks of Tripoli with its traditional soap factories.

The Abu Ali river also acts as a dividing line between different income groups in the city. In general Tripolitans living on the western side of the Abu Ali river enjoy higher earnings than the people on Abu Ali’s eastern bank.

Currently 270 meters of the river in Tripoli’s center are covered with a concrete platform, courtesy of a project by Lebanon’s Council for Development and Reconstruction (CDR). The project’s goal was to relocate the informal market vendors from the streets to the platform and to cover the river so it wouldn’t be used as a garbage dump.

For Christina Attiyeh the CDR’s project missed the point. Covering the river with a simple platform is not the solution. Social development can only happen when interacting with its environment, not in disconnection. The platform, with the dark spaces it created underneath, encourages people even more to use the river as a waste bin.

What is needed, Christina Attiyeh writes in her thesis, is a performative space: a space that acts as a stage for the inhabitants’ rituals, their stories, their encounters; a space that favors the formation of heightened experiences in a city rich of cultural heritage and cultural diversity.

With Narrating Spaces, Christina Attiyeh envisions a public space with auditoriums, workshops, public classrooms and madrassas on both sides of the river. Local craftsmanship shall be encouraged with the proximity of the nearby khans. Narrating Spaces, with its little gardens and promenades, aims to enhance the communication between users and the river, allowing the user to experience the river through different moments.

However Christina Attiyeh’s ideas don’t stop here. Living and dying are never far apart in Tripoli. The notions of life and death and their affiliation to communal processes are contradictory, yet complementary at the same time. A burial space for the martyrs who were killed in previous clashes and bombing, juxtaposed with a park that wants to give life back to the city, is one of many additional novel features of Narrating Spaces.

“What are the chances that your project will ever see the light of the day?”, I asked Christina when we discussed Narrating Spaces.

“As a consequence the term ‘public’ has lost its meaning in Lebanon,” Christina Attiyeh continued. “There is not one public, but several publics. Certain publics become neglected while other publics are attended to.”

“What does this mean for your project?”

“Proposals like my project that attempt to cater to ‘all publics’ must most likely be funded by the municipality,” Christina told me. “Unfortunately, unlike the private sector, the municipality of Tripoli lacks the resources to finance such a development.”

“Funding aside, could your project start a new era in Lebanon, an era of creating new public space?”

“I wished,” Christina Attiyeh said. “Sadly though, public space in Lebanon is completely lost in this perennial battle of political power and authority. Architecture therefore becomes blurred within the dichotomy of political developments and private interests.”

In a society that has given up being a community, luxurious apartments are built at the speed of light while garbage bags end up rotting in the streets. Narrating Spaces aims to give the public a stage for their performances and to make public space the event itself. Narrating Spaces aims to regain the space that has been lost and to give a new boost to a Tripoli that desperately needs to recover and evolve.

However the lack of funding is not the only problem to implement the project. Changing the attitude of a people that has retreated into the private – feeling abandoned and sold out by its government – is another almost impossible task. Christina Attiyeh is part of a newer generation of Lebanese who seek to reform Lebanon with innovative ideas. Chances are that her Narrating Spaces will be another symbol of “brilliant proposal, but not in Lebanon” that plagues this country for too long already.