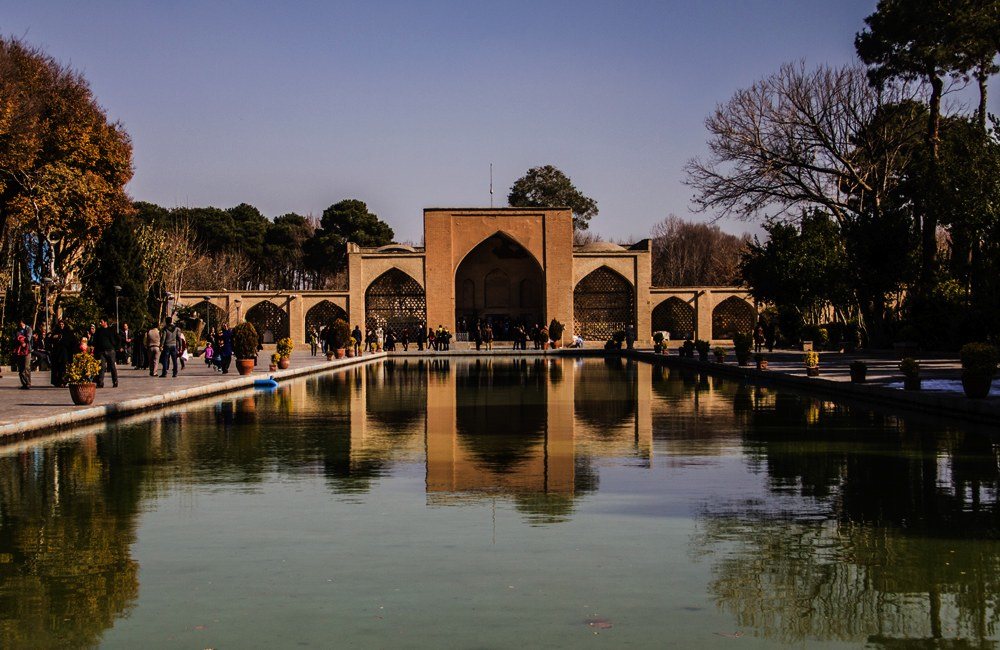 Hanieh Khosroshahi visits two of the greatest places for Persian and Islamic architecture in Iran. Below are just some of the beautiful architectural sites these two impressive cities have to offer.

Persian architecture dates back to at least 5,000 BCE. It features a great litany of buildings and masterpieces, from teahouses and gardens to palaces and mosques. Kashan and Isfahan, both situated in Isfahan province, are two cities that showcase some of the best traditional architectural sites that can be found in the country and perhaps the entire region.

Although Kashan is more often than not bypassed by many tourists as they make their way from Tehran to Isfahan and other larger cities in Iran, its history, which dates back approximately 9,000 years, illustrates that it is deserving of admiration.

Photo: Behind the mud-brick walls of Kashan, Shahzadeh shrine stands apart due to its cone shaped roof. Built in 1894, it has European-style ceilings and colourful tiles.

Photo: The inside details of Seyyed Jafar Tabatabei’s house feature stone reliefs and fine stucco. Consisting of three sections, the house was built in the early 1880s for the affluent family.

Photo: The rooftop of one of the most famous bathhouses in Kashan, Hammam-e Sultan Mir Ahmad offers a great view of the city. The 500-year-old bathhouse features colourful tiles throughout.

This alluring yet subtle city sits on the edge of the Dasht-e-kavir desert. It got its name from the Persian word for tile, “kashi”. Perhaps the most breathtaking area of the city is where you find the traditional 19th century houses that Kashan is most famous for. Kashan is also known for having one of the most well known gardens in Iran: Bagh-e-fin.

Photo: Bagh-e-fin is one of the most famous gardens in Iran. It was designed for Shah Abbas I as a classical Persian perception of paradise. The garden is where the murder of Mirza Taghi Khan, more commonly referred to as Amir Kabir took place. He served as Iran’s king from 1848 to 1851.

Photo: The garden features a pavilion built in the Qajar period, and the cedar trees are up to 500 years old.

Photo: Masjed-e Agha Bozorg is famous for its symmetrical design and sunken courtyard. The 19th century mosque has a wooden front door that is said to have as many studs as the verses of the Quran.

A series of bathhouses and palaces, decorated in intricate and detailed tile work and art makes Kashan stand out as one of the greatest examples of Persian and Islamic architecture in Iran. The city is also famous for textiles, pottery, rugs and rose water.

Contrary to Kashan, Isfahan features a much more obvious beauty. Its diversity and grandness is breathtaking and inviting. Its impact is felt immediately, whether you are standing in the middle of the Naghsh-e-Jahan square or walking on the famous Khajoo bridge.

Photo: The famous Naghsh-e-Jahan Square is one of the largest city squares in the world. It is a superb example of Islamic architecture and has been designated by UNESCO as a World Heritage Site. Credit: Arad Mojtahedi

Photo: Naghsh-e-Jahan Square features a variety of Islamic architecture, most notably the Masjed-e-Shah. The wooden door of the mosque is featured here, facing the square and the Sheikh Lotfollah Mosque to its right.

Photo: Although this small section of the Masjed-e-Shah does not do the whole thing justice, it does show the richness the mosque has to offer. The blue-tiled mosaic design and the unity of the overall architecture make it one of the most iconic mosques in Iran.

Having been the capital of Persia twice, Isfahan is renowned for its Islamic architecture, with beautiful mosques, palaces, and bridges. Its versatility has earned it the nickname “nesfe jahan”, meaning “half of the world”. Today, Isfahan is the third largest city in Iran, known for textiles, carpets and handicrafts.

Photo: Masjed-e Sheikh Lotfolla was built between 1602 and 1619, and stands in harmony with the larger Masjed-e-Shah. The signature blue-turquoise tiles of Isfahan can be seen on the inside of the dome.

Photo: Kakh-e Chehel Sotun is a palace built during the Safavid era as a pleasure porch and a reception hall. It features the classic Persian garden and an elegant terrace.

Photo: The palace is most famous for its 20 slender wooden pillars. Chehel Sotun means “Forty pillars” and is a reference to the number reflected in the pool in front of the palace.