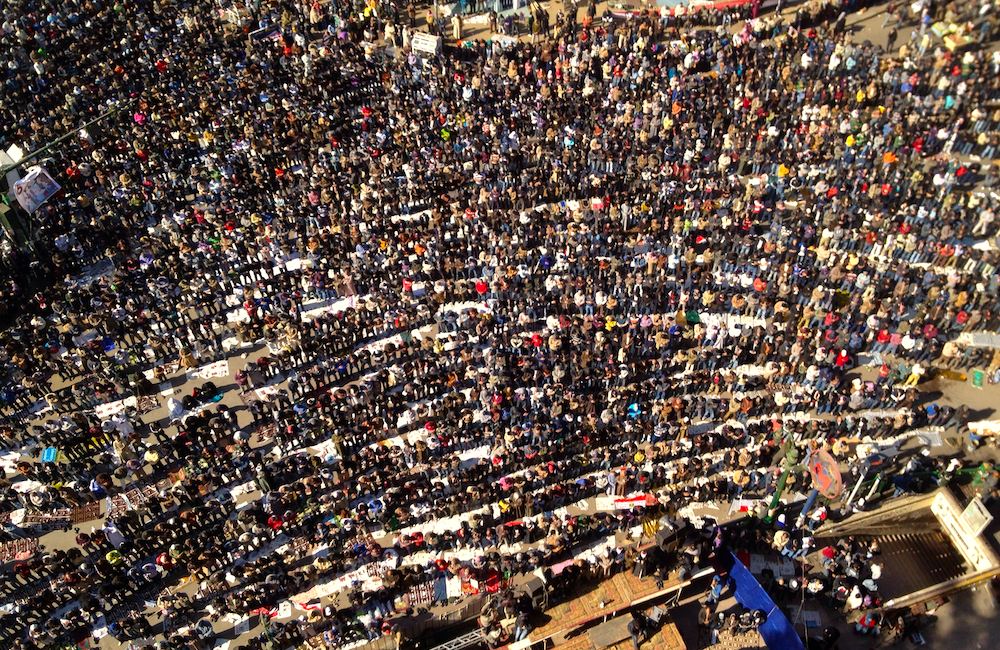 Three misconceptions are rampant in the mainstream Western discourse about the current catastrophic situation in the Arab region, writes Hisham Bustani.

The first misconception is the existence of a “true”, supra-historic Islam. A raging fight is currently taking place of who truly represents “Islam”. Is it ISIS, al-Qaida, the Muslim Brotherhood, or the versions promoted by different Arab regimes? Presidents Barack Obama and François Hollande have also made their contributions on that aspect by declaring that extremists don’t represent “true” Islam.

My argument is that there is no such thing as a supra-historical “reality” of Islam that is “pure” and “virtuous” as opposed to an evil, violent misrepresentation; or the opposite. Islam, like all other religious and ideological doctrines, is based on texts, and texts are always open to different interpretations that might be explanatory, historic, symbolic, representational, deconstructionist, critical, etc. All such interpretations are equal since they are based on subjective opinions serving certain interests.

There are different readings to the set of different texts of Islam, each tailored to serve a political structure or purpose, resulting in contradictory formats of what is thought to be a single entity. Ruling elites have always had their versions of Islam, mainly based on incriminating dissent and promoting the subordination of lay people to those in charge, resulting in a pacifist, politically-sterile version of Islam; the opposition also had their versions, generally based on the non-representation of the rulers to the “true essence” of Islam, where man is enslaved only to God but to no other, resulting in a militant, politically-active version of Islam. Both versions are exclusivist, enforcing their own version of Islam as the only “true” one: confiscating politics, and suppressing dissent. A claim on a “true” Islam (whatever the version was) is only aimed at concentrating power, confiscating political debate, and crippling opposition.

This leads us to the second misconception: The apolitical nature of extremist Islamic groups. The Islamist extremist religious groups plaguing the Arab region, are not just “religious fanatics”, or unrestrained psychopaths. In their core, they are political constructs representing a very violent reaction to the status quo.

In his essay “ISIS is a revolution”, Scott Atran compared ISIS to the French and other known revolutions, and mentioned the use of terror as a political tool (the guillotine vs. sword beheadings). He made clear that terrorism is a tool of political protest and change.

What are the terrorists protesting and what do they want to change? The same thing the Arab uprisings came out to accomplish, but to a different end: the removal of subordinate, corrupt, fragmented, oppressive regimes (keep in mind that Arab regimes oppressed both secular and religious opposition all the same).

There is one major difference however: The massive crowds of the Arab uprisings, who generally hoped for political democracy, economic equality and public liberties had no political structures capable of enforcing their demands and building their alternatives; throughout their long reign, the Arab regimes had made an excellent career in destroying and coopting such structures (political parties, trade unions, etc). The only institution that was left alone was religion, and on different levels: a formal state-sponsored follow-the-ruler version of Islam; a socially-based advocacy-type of organized Islam that was a good tool/ally to the regimes during the leftist/nationalist tide of the 1950s-1970s, well-institutionalized because of state tolerance (the Muslim Brotherhood); and a modern, fundamentalist, networked, militant, armed Sunni Islam that was sponsored by the USA and Saudi Arabia during the Cold War to fight a proxy war with the Soviets in Afghanistan (the Mujahedeen), and a similar Shiite version sponsored regionally by Iran after the 1979 Islamic Revolution.

It is worth noting that all those versions of Islam exist in a subtle continuation. Revisionist and reformist Islam was politically and socially suppressed and is confined to elitist intellectual circles. Thus it was only normal – having no competition from destroyed secular civil groups – that well-organized, trained, financially able, socially rooted and politically supported Islamist groups (terrorist and non-terrorist) would take over the scene alongside the regimes.

Enter third misconception: The silence about the role of global and regional powers, and the historic effects of Colonialism. Interventionist policies that have succeeded the colonialist era in the Arab region made sure that the subordinate, corrupt, oppressive regimes are maintained and sustained. In his recent book “Arab Development Denied”, Ali Kadri argues correctly that the Arab regimes benefited economically and politically from de-developing the post-colonial Arab “states”, crippling them and pushing them further into poverty. Those failed “states” that destroyed the social fabric over decades of corrupt rule, and resulted, naturally, in failed social movements and the rise of extremely violent Islamic opposition movements, were maintained by internal oppression, but more importantly, by external sponsorship.

Another aspect is the role of interventionist policies in facilitating, sponsoring and supporting terrorist groups. In addition of the clear example of the Mujahedeen (precursors to al-Qaida), the US invasion of Iraq in 2003 is another: the country was left in sectarian chaos, where Iran and its sectarian satellite groups had the upper hand, paving the way for al-Zarqawi’s version of al-Qaida to gain foot and get support from rival regional powers and Sunni social formations, especially as their power struggle (guised under a Shiite/Sunni conflict) expanded into Syria.

To try to understand and affect change in a reality means we have to look at that reality as it is, rather than looking at it as a set of superficial misconceptions:

Different versions of Islam are different representations of political and power structures; this cannot be resolved by proposing yet another imaginary, supra-historic “essence” of Islam.

Reality is found in politics: Instead of a state-security-based approach to deal with the current situation in the Arab region, a human-security-based approach towards the problems of corrupt regimes, de-development, poverty, unemployment, inequality, and the complete failure of the post-colonial Arab “states” and regimes will be more productive.  The first approach serves only the continuation of the cause of the problem.

Also, we should focus on the destructive role of global powers and regional players via military, political and economic interventionism that is initiating and fueling the “fire”, and the multiple benefits they are extracting from the deaths of hundreds of thousands of people, the destruction of entire societies, and generating terrorism as this proceeds.