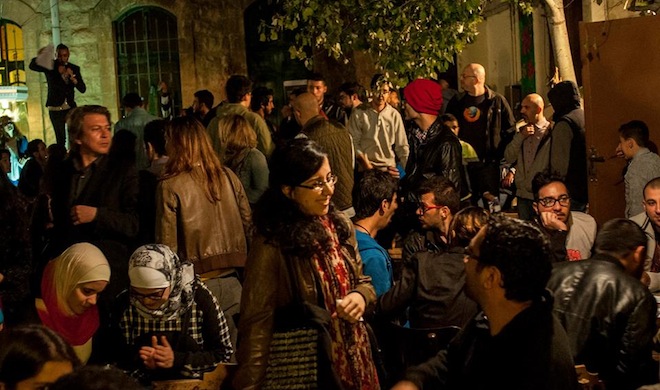 Fed up with the (Western) idea that everything in the Middle East is about politics and religion, scholar Hakim Khatib headed over to Naqsh, an exciting "cultural space café" in the Jordanian capital.

Political conflicts dominate discourses around the Middle East. Unfortunately, this has the affect that even cultural, historical, philosophical, and psychological aspects of human civilization in this region are framed in exclusively political terms. This has led to minimizing the complexity of the fabric of these societies.

Defying these rigid structures of categorization, Jordanians with scarce resources are now attempting to create, elevate and implement innovative ideas at the local level. The aim is to raise awareness and develop new ways of thinking, not only for improving the lives of the people within the region but also to enhance inter-cultural dialogue between the Middle East and the West. The impact of these projects might still be barely noticeable on a macro-scale; yet their impact is significant on the micro-level in the Jordanian society.

Cultural space cafés, such as Naqsh in downtown Amman, are examples of such grassroots projects. Naqsh was founded by Yahya Abu Safi, a Palestinian refugee, in 2014. The space has also been described as an “eco-social project”. The café rises on the remnants of an old house – built in 1919 and later abandoned for more than 15 years.

Abu Safi initiated the restoration of the house in 2013. Several Jordanians volunteered to help in restoring the old building, together with a group of Europeans and Asians who joined the efforts later on. Naqsh is thus a product of the collective effort of Jordanians, Palestinians, Syrians, Japanese, French and Germans.

The social and cultural value of Naqsh lies in promoting cultural exchange among the locals themselves as well as with foreigners.

“At the beginning when we were trying to restore the house, some locals used to show up and wonder about this strange idea – ‘a cultural café?’ they used to say,” Abu Safi explains. “The idea of a cultural space café in downtown Amman was very strange for the people then.”

“Many people started visiting our events, especially since this house is located in the middle between east Amman and west Amman,” Abu Safi says.

The capital of Amman is roughly divided into two dimensions of reality: west Amman is the lavishly rich, luxurious and expensive part of the city, whereas east Amman is mostly poor and marginalized. West Amman is populated by the elite – managers, diplomats, high-ranking governmental officials, and businessmen. Infrastructure and public services, well-equipped schools and medical centers, although unduly expensive, are found at every corner. By contrast, east Amman suffers from crumbling infrastructure and lack of public services, including poorly equipped schools and medical centers.

“While Naqsh café is located in the middle of two widely different social classes, it offers a platform for an integrative involvement from both sides,” Abu Safi explains.

“We try to offer a space to all people from all walks of life. Many Jordanians and people from Africa, Asia and Europe visit our events regularly,” he adds. “This is a place for everyone, who believes in peace, hope and harmony.”

Naqsh is also working on setting up a library for the neighborhood, as well as organizing literary readings and musical sessions for the youth. Despite the fact that most innovative projects are usually concentrated in west Amman, cultural initiatives have also spread across the Jordanian capital in recent years. This development owes to people’s increasing awareness of cultural and social platforms on the one hand, and, on the other, to the increase, albeit fluctuating, of tourism in the country.

The impact of Naqsh on the youth appears to be positive; several youngsters regularly visit the café and use it as a space for trainings and exchanging ideas. Among these is Bushar.

Bushar, which mainly consists of high school and university students, now “has a place to improve their talents and share their aspirations,” adds Abduljabbar Al-Barqawi, a member of the group.

“Through our talents, we hope that we can contribute to the society by raising awareness and improving the quality of life of the Jordanian people,” Nashwan says, referring to the group’s active engagement in voluntary work. “Our goal is to build cultural bridges beyond the Jordanian borders and to show the world that we, too, have talented people”.

Cultural exchange between people is a fundamentally human process, which is difficult to exclusively frame as political or religious. By looking into the context of these emergent cultural projects across Jordan, we realize that the focus here is neither on politics nor religion. It may come as a surprise to Western pundits out there, but not everything in the region is.