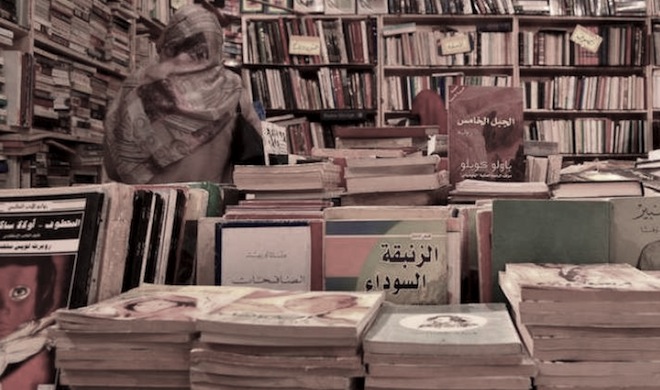 The BBC recently published an interview with an activist-librarian – "Ahmed" – working in the suburbs of Damascus.

The BBC reporter asked “Ahmed” why — when there is no food, no electricty, and no safety from shelling or barrel bombs — would people want a library.

But why a library?

“When we started our revolution,” Ahmed told the BBC, “our aim was not to demolish things, our aim was to build things.”

So activists gathered the books for this library, housed in a four-story building, from people around the area. In many cases, they have been able to get permission. But in some cases, such as when a person is detained, they have gone in and harvested books that would otherwise be destroyed.

Yet the owner can always come back and claim the book:

Whenever we take a book, we write the name of that person on the book, so that the people would know that we’ve taken this book from that person, and in case the person wants to come back and take their book, they would know where to find it.

At the moment, Ahmed said, “we have 30,000 books in the central hall of the building, and we have 2,000 other books in the warehouse.” The building, he said, has been shelled several times, “to the extent that the top floor is almost completely destroyed.”

Also, when forces bomb the area, there is a great deal of pressure, such that shelves collapse and there’s dust everywhere. “It happens on a frequent basis.”

The library is open to all, but the hours are not great, Ahmed said. “Unfortunately, because the people who catalog the books are all revolutionaries…and they cannot be present all the time. So at the moment, it opens from 11 a.m. until 5 p.m.”

Listen to the full interview here: