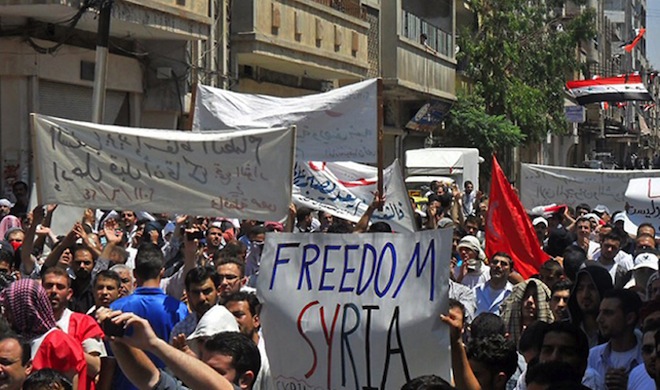 Esseline van de Sande in conversation with renowned activist Rafif Jouejati on the promise of an inclusive Syria.

It must have sounded as music to the ears of the prominent activist Rafif Jouejati, representative of the Local Coordination Committees, the largest network of non-violent grassroots activists in Syria, who has tirelessly been promoting the same values. She hasn’t heard the news yet when I meet her between flights at Schiphol airport in the Netherlands. Rafif is on her way to Gaziantep to meet civil society activists. On her return, she will join the program of Alternative Roads to Peace in Amsterdam and The Hague as main speaker. We talk about resilience, agents of change and the Freedom Charter as a tool for transformation in Syria.

“Just when the revolution started, I came to realize it wasn’t Syria itself that gave me this feeling of being under pressure, it was the system,” she says. “Seeing young Syrians taking the risk to die and demonstrate for freedom, democracy and dignity. The Syrian citizens have broken the barrier of fear, they dare to say ‘no’ and they are demanding a radical change. You have to know that under the Assad regime a gathering of five people or more requires government permission. So when you have a thousand people joining an anti-government protest, it is by definition spontaneous. All phones are tapped. All communication is surveyed. Conversely, when you see people take to the streets to support Assad, you know that they are forced to do so and that their ID-card will only be returned to them after the demonstration. So if a thousand people spontaneously start to demonstrate, in a repressive environment, then this translates into a hundred or five hundred thousand, as we saw in Hama and Homs. And more recently, with the ceasefire, people take to the streets again. The world failed to see how much inventiveness went into these protests, in the face of fear, how much talent had to be mustered to find ways around the system. This is a grassroots movement of agents of change and which is still very much alive after five years of war. These are the civilians that are saying no to corruption, no to tyranny, no to cronyism, no to all these things that the Syrians have been forced to live with for five decades. Our job as Syrians abroad is to listen to, follow and support those inside.”

“Media have a responsibility to expose humanity, not just the atrocities,” Rafif continues. “What would happen if journalists would partner with activists and cover the other side of the story? Media seem to be so busy exposing inhumanity therefore people become hardened and fail to recognize the absolute brilliance of civil secular and non-violent actions. It would be interesting if the media would shift their focus a little bit and look at what real people are experiencing every day.

“Every time I leave Gaziantep, I am energized, because the activists are working and implementing projects of hope and resilience. They have not wavered, although at times they are frustrated, sad or depressed. It is extremely painful to see all these terrible things happening to your own country. And yet, at the same time, people ask themselves: what action should we take? How can we accomplish anything? At the end of the day, you have to conclude that if you can impact the life of one child, one woman or one family positively, then yes, you have accomplished something, and you multiply it. These people are the real agents of change.”

“There are also negative agents of change: Daesh, the regime, Hezbollah people and there are the mercenaries, people who are just in for the money. Countering them are non-violent activists. These are not just people who carry signs in protests. They also set up medical clinics, schools, restaurants, and libraries in warzones. In one area they have set up a weekly event. An outdoor thing, since the space has been bombed. It is not sheltered, but they managed to set up a sheet and a projector and they show cartoons, once a week. Initially, it was just meant to entertain children, but all the families and neighbors came and so this became a meeting point. Things like this have been happening around the country for five years. Wherever people are gathering, they are doing things for their communities. This is an indication of the real spirit of the Syrians.”

“Since the end of 2014, we are working on the Freedom Charter project, an initiative that involved the surveying of more than fifty thousand Syrians about what they want for the future of their country. The reason we did this was the premise, on an international level, that Syrians are not united. That there is no clear picture of what they want. So we decided it would be interesting to find out what it is the people want. During the summer and fall of 2013 we spent a lot of time selecting surveyors and training them to ask questions and listen objectively. We spent a lot of time working on the type of questions so people would have a chance to fully disclose their opinion. Even if we didn’t like the outcome as human rights defenders and activists, we committed ourselves to publishing the charter. So our team of activists went and conducted surveys in all fourteen Governorates of Syria and in the refugee camps in Lebanon, Turkey and Jordan. The surveying started on the third anniversary of the Syrian Revolution and continued for three months.”

“This is the largest survey ever held in Syria. You have to understand what it means to survey even one person in that country. Whether you are in regime-controlled territory or, in some cases, in territory controlled by Islamists. Based on the responses, we developed what is now known as the Syrian Freedom Charter. We created the survey together with international experts who have experienced conflicts, like. Dr Howard Barrell, who has been with the African National Congress and was very instrumental in the Freedom Charter of South Africa in 1955, and Marese Hegarty, who brought her experience from the conflict in Ireland.”

“The Syrian Freedom Charter is a statement of the will of the people. It is about two pages worth of principles and a platform the Syrian people need for the future of their country. The Charter talks about democracy, elections, a new constitution, equal rights for all Syrians and above all: freedom, dignity and democracy for all.”

“The Freedom Charter could be the foundation of a new constitution. It can be seen as an educational tool, it is a trigger for debate that has not been allowed in Syria for almost more than fifty years,” Rafif explains. “It is a mechanism to introduce and debate concepts that started the revolution. What is freedom? Where does my freedom end and yours begin? How can we live together, if we have different perspectives on freedom? It is these things that need to be introduced into the Syrian narrative. We see the Freedom Charter also as an employment opportunity for activists in Syria. Every male activist who is working on collecting signatures or talking to people, or disseminating the charter, is not taking up arms, is providing for his family. For every female activist working on the Freedom Charter, it is an opportunity for economic and political empowerment. This is about shaping a future in which citizens participate and design their own future. Unlike what we are seeing now in negotiations in Geneva, Syrians don’t have a voice, particularly Syrian women. To be sure, all of us who labored on it, are from the opposition. But we chose our words carefully. We are talking about a vision for the Syrian future, regardless of who is in power.”

“A lot of the people will say the demands formulated in the Freedom Charter are quite obvious, and I agree. These are very straightforward demands from a people that have finally spoken out about what they want. So the impact of the Freedom Charter is not the fifty thousand people surveyed. A real impact would be to have a million or two million or more signatures endorsing the Charter. A real impact would be Syrians standing up and saying: ‘Yes, I agree with these principles this is the direction I want my country to take.’ The more Syrians sign it, the more influence we can have on international bodies, on the international community. So that when there is a Geneva 4,5 or 20, we can say: ‘This is what the Syrian people are demanding, listen to us. You have to hear us out.”

“The response of the regime was not only military. They were looking for ways to break down society and they succeeded. They used rape as weapon of war. They pitted families against each other, pitted entire sects against each other. Syrian society became fragmented and as people began to flee, the family structure broke down. We are not only fighting a dictatorship, this society needs to reform itself. Syria is a melting pot of ethnicities. We want Kurds, Assyrians, and Circassians to freely speak their language and celebrate their culture. If we are going to move from a dictatorship to democracy we need to integrate human rights for all. We need to recognize that when we talk about an inclusive society, this means for example that an Ismaeli man should have the same rights as a Sunni woman.”

“In 2014 I was one of the spokeswomen of Women of Syria in Geneva. Last January I was again invited to take part in the women advisory board to De Mistura, the UN special envoy seeking a peaceful resolution of the conflict in Syria. I declined the invitation as I felt this was one more way of subjugating women. If the women are able to give advice, this means they are qualified to sit at the negotiating table. Nobody in Syria is a professional politician, nobody. Nobody has been given professional training, so we are all qualified at the same level.”

“For me it is a shift in attitude between exercising your rights and demanding them. In the charter, there is a clause on women, about equal pay, equal rights. That was a direct result of the survey. I have immense respect for friends and colleagues who take the process of empowering women step by step. But I completely disagree. They have found an astute way of packaging the women’s issue. It should be an issue of human rights and representation.”

“A lot of people wonder if there is anything left of this democratic uprising after five years of war. Well, as soon as the ceasefires started, the Syrian people took to the streets in non-violent protests. Calling for the same things they did at the beginning of the uprising. So the answer is yes, the people have proven that if you eliminate a military response to free speech they will go out and exercise their rights of free speech and clearly articulate their demands. I believe this applies to the majority of the Syrians.”