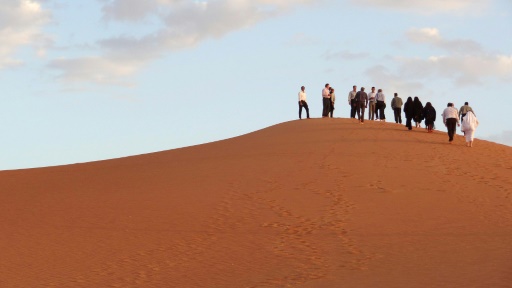 Reddish-brown sand dunes twist across the desert, their canyon-like ridges accentuated by late afternoon sun as a Saudi Aramco jet approaches the site of a remote gas plant.

“Not many people live down there,” the captain announces in an American accent.

The Empty Quarter, a vast desert in the southern Arabian peninsula, conjures an image of what Mars might look like.

But it is here that technological advances enabled Saudi Arabia’s state energy giant to build the plant, and drill for oil despite the isolation and harsh environment.

The Shaybah facility stands at the heart of Saudi Aramco’s long-standing dominance of the world oil industry, and its path for the future.

“Of course the location of Shaybah is a challenge,” said Faisal Shihabuddin, a 28-year-old Saudi engineer among about 1,500 workers at the site.

Despite the challenges, it has been successfully developed over the past 20 years “in the middle of nowhere,” he added.

Although global oil prices have collapsed, production is expanding at Shaybah, as it is in other units of the company at the centre of the kingdom’s Vision 2030 drive for diversification away from oil.

The government plans to sell less than five percent of the firm in what officials say will be the world’s largest-ever share offering, while transforming Saudi Aramco into “a global industrial conglomerate”.

At Shaybah, near the United Arab Emirates, hundreds of kilometres (miles) southeast of Saudi Aramco’s headquarters at Dhahran, that transformation was on display to foreign journalists invited for a rare tour.

Their shift finished, workers in hardhats and blue overalls walk out from a complex of pipes, stacks and holding tanks at Shaybah’s plant for Natural Gas Liquids as the sun drops behind.

Products of the plant, opened late last year, include propane and butane recovered from natural gas and used in petrochemical production, a focus of Saudi Aramco’s move away from simple oil extraction.

By 2020 the company says it will have tripled its gas processing capacity from levels at the turn of the century.

The company says gas will help reduce the amount of oil the kingdom uses for electricity. It is also an ingredient for other industries, aiding diversification, while being more environmentally friendly than other fossil fuels — all goals of the Vision 2030 plan.

More oil is also being pulled from rocks in a field of more than 600 square kilometres below the soft Shaybah dunes.

That is an increase from Shaybah’s current 750,000 barrels a day and only a part of Saudi Arabia’s total daily output of more than 10 million barrels from inland and offshore fields.

At Shaybah, drilling occurs underground at hundreds of wells controlled remotely by operators who receive data by satellite from tentacle-like probes exploring the rock.

The information appears as squiggly lines resembling an electrocardiogram on their computer consoles at a room like a small lecture hall in Dhahran.

At a bigger control centre, about half the length of a football pitch, the kingdom’s entire hydrocarbon stock is monitored on multicoloured floor-to-ceiling screens.

Dispatchers sit at several semi-circular stations monitoring flow and pressure data “to listen to the heartbeat of the system” and ensure its safety, said Abdullah al-Mansour, manager of the Oil Supply Planning and Scheduling Centre.

Along with graphs and other numerical displays, the screens show icons of tanker ships on an electronic calendar.

The work is so sensitive and vital that cameras are forbidden and a smaller backup centre has been readied elsewhere, Mansour said.

The centre is located within a series of modern grey office buildings, around a pedestrian plaza, that include a research centre and a training facility for engineers and geoscientists.

Among its tools is a three-dimensional theatre where trainees can virtually travel into the layers of oil, gas and water under the Shaybah sands.

For Shaybah-based workers like Abdullah al-Aiderous, Dhahran is a weekly refuge, reached by Saudi Aramco’s own fleet of passenger planes flying into the company’s private terminal.

He is among the 84 percent of the company’s roughly 66,000 employees who are Saudi.

Shihabuddin, the Shaybah-based engineer, said working in the desert outpost is not so hard, “except that you’re far away from home. Beside that, everything is available here.”

Dhahran has “The Camp”, home to 20,000 in what resembles suburban America with bungalows and parks.

Unlike the rest of Saudi Arabia, Dhahran and other major Aramco facilities even have their own cinemas.

At Shaybah, the best show is the sun setting behind the dunes in the quiet wilderness, before orange lights from the gas facility glow in the vast darkness around it.