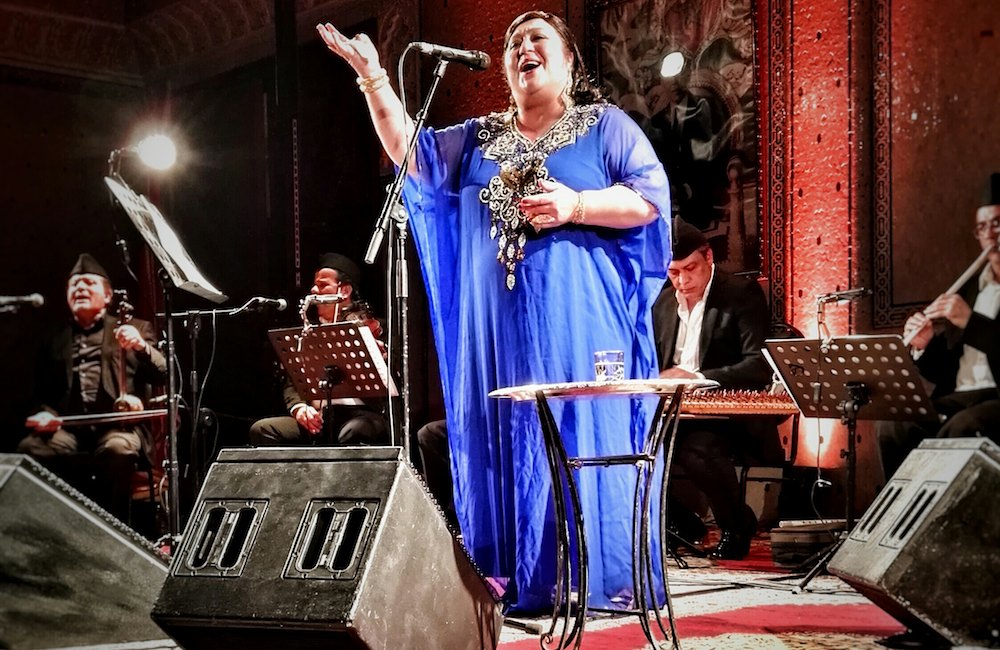 A lot has happened since iconic artist Farida Muhammad Ali attended Baghdad's Academy of Music in the 1980s. We caught up with her in Morocco to see what she had to say about the current state of Iraq, its lost diversity, and why 'the maqam' is still the very essence of her native land.

It was raining all week in Fez. Navigating through the narrow alleyways of the old city was difficult with an umbrella in hand. The rain and the cold was a fun killer for the festival de la musique sacrée for which I had come to Morocco; several concerts were cancelled or had to be moved indoors because of the bad weather. The ‘grey hair no dye’ orientalist audience – many from France – didn’t care. Now it was time to be conscious, now it was time for world music. For many Moroccans the doors to the festival remained locked though. They couldn’t afford the tickets.

I was nervous when I drove to her hotel to interview Farida Muhammad Ali. After all she was the mother of Iraqi maqam, a star of the urban classical vocal tradition of Iraq, an art that is inscribed in UNESCO’s ‘representative list of the intangible cultural heritage of humanity’. However, my tension quickly vanished. Farida, the Aretha Franklin of the Arab world, if you like, turned out to be a very friendly, radiating personality.

I caught Farida rehearsing for her concert later that day together with her group, the Iraqi Maqam Ensemble, led by Farida’s husband Muhammad Gomar. All members of the group are Iraqis living in exile, scattered all over Europe. They came from the Netherlands, from Sweden, Belgium and Germany to play the music they grew up with.

After the rehearsal I was able to sit down with Farida Muhammad Ali. “What are you doing when you sing the maqam?”, I asked her.

“And why the reciter?”

“Because originally the goal of the maqam was to recite the Quran,” Farida replied. “Later the maqam opened itself up to the secular world. Poetry and topics like the beauty of nature or love and the grief of departure were added to its repertoire. When performing the maqam the reciter must feel these emotions and transmit them to the audience.”

The exact beginning of the maqam tradition in Iraq is unknown. Some believe that the maqam is a several hundred years old tradition, brought in by the conquering Ottoman Empire in the 16th century. Others date its origins back to the Abbasid period when Baghdad was a scientific and cultural hub. Besides in religious contexts, the maqam was also sung in zurkhanes, athletic houses, to energize the training athletes.

“What is the message of the maqam in 2016?”, I continued with my questions.

Farida looked back in nostalgia. “We immigrated to Europe in 1997,” she said, “and now it is our duty to preserve and to transmit the heritage of Iraq that is the maqam. And in light of what happened to Iraq in the past years, it is very important that we keep cultivating this heritage.”

“The 1980s were the golden age of Iraq,” Farida went on. “Today a lot of things in Iraq have been destroyed. It is a real tragedy. For us, the musicians, when we perform the maqam, this is an outlet for our desires, our past and our roots. However, the maqam is also made for a Western audience. Probably this audience is not familiar with that type of music but they can be dazed by its beauty.”

Emigrating is always painful. While rehearsing for the concert, the musicians of the Maqam Ensemble seemed to be moved by their own music, overcome at times with melancholy. “What did you lose when you left Iraq?”, I asked Farida.

“I consider myself a lucky person,” she explained to me. “We were lucky in our bad luck compared to other Iraqis who have lost much more. Any exile is a heavy loss and a deep going pain. And nobody and nothing is able to compensate for this. Iraq is a special country; we had a lot of diversity – ethnically, linguistically, in food – and we have lost everything.”

Luckily in the Netherlands, Farida tells me, she was able to establish the Iraqi Maqam Foundation, together with Muhammad, her husband. Everybody involved with the foundation is aiming to convey the history and the essence of the maqam on an academic level. There was even a person who came all the way from the United States to study with Farida in Holland; he has now his own group in the US.

This year’s Fez festival was dedicated to ‘the founding women’, referring to Fatima al Fihriya who in the year 859 founded the world’s first university, the University of Al Quaraouiyine in Fez. Farida Muhammad Ali is a pioneer in her own right. She was the first woman to recite the maqam, traditionally a male domain, to a wider audience.

“Do you consider yourself a female role model?”, I asked her.

“There is always a lot of talk about the Arab woman and what is her role,” she answered. “There are a lot of misconceptions too. When I started to sing the maqam, I encountered a lot of difficulties. However in my first year of university I was able perform on TV and it was the talk of the town for months. This was my breakthrough. After that I insisted even more to continue

“In that sense,” Farida continued her argument, “I do consider myself a female role mode. Some people in the Arab world keep saying that women are not allowed to do this or that. Some people say that a woman shouldn’t be on stage. And that is precisely what I am doing today!”

Nowadays the Iraqi magam is under double stress. On the one hand there are quite literally hundreds of TV stations in the Middle East, but the maqam is absent. The programs are flooded with pop music, Western or Arab style.

On the other hand there is increasing sectarianism and fundamentalism between the Mediterranean Sea and the Persian Gulf. On the day of my interview with Farida Muhammad Ali, the Islamic State brought carnage to Baghdad, killing more than hundred people in four different bomb attacks around the city. Under these dire circumstances there is hardly any room for the grandeur of the maqam.

When she studied at the Academy of Music in Baghdad in the 1980s, there were more women than men studying with Farida. A few days ago she met a musical group from Iraq and asked them about the situation at the academy today. Currently there is one single woman studying at the academy, a result of the surging religiosity and fundamentalism in Iraq. For these people a woman singing or playing an instrument is a no-go.

“This is my real fear,” Farida added. “That because of this radicalism, our heritage, the patrimony of Iraq, will disappear.”

For many Iraqis living abroad, Iraq has become a foreign land. For them the maqam embodies the tragedy of Iraq. Nevertheless Farida is optimistic about the future of the maqam. “You have to consider,” she said, “what Iraq went through in the last decades. Sectarianism and radicalism have taken more and more center stage. However the maqam is the soul of Iraq, the soul of Baghdad. As you have heard when we were rehearsing, the lyrics of my songs tell about the streets of Baghdad, about life in Baghdad.”

And she concluded, defiantly: “The maqam is the essence of Iraq. The maqam will not die.”

Witnessing Farida in concert was as impressive as her statements during our interview. Every cell of her body vibrates when she recites the maqam; the virtuosity of her vioice and her command of the songs are breathtaking. With Farida Muhammad Ali, the maqam is definitely alive.