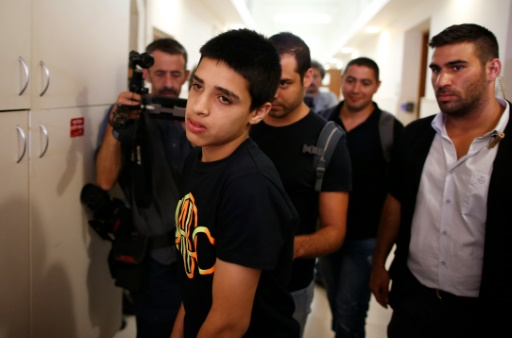 Israeli lawmakers approved jailing children as young as 12 convicted of "terrorist offences" in the wake of repeated attacks by young Palestinians, parliament said on Wednesday.

“The ‘Youth Bill,’ which will allow the authorities to imprison a minor convicted of serious crimes such as murder, attempted murder or manslaughter even if he or she is under the age of 14, passed its second and third readings… Tuesday night,” an English-language statement said.

It added that the seriousness of attacks in recent months “demands a more aggressive approach, including toward minors.”

The statement quoted Anat Berko, a lawmaker from Prime Minister Benjamin Netanyahu’s right-wing Likud party and the bill’s sponsor, as saying “to those who are murdered with a knife in the heart it does not matter if the child is 12 or 15.”

Violence in the Palestinian territories and Israel since October has killed at least 218 Palestinians, 34 Israelis, two Americans, an Eritrean and a Sudanese, according to an AFP count.

Most of the Palestinians killed were carrying out knife, gun or car-ramming attacks, according to Israeli authorities.

Many of the assailants were young people, including teenagers. Other youths have been shot dead during protests and clashes with security forces.

“Youths, such as Ahmed Manasra, who engage in terror and seek the death of Jewish civilians will not be shown mercy by the law,” media quoted her as saying.

Manasra, a 14-year-old Palestinian, was convicted in May of the attempted murder of two Israelis in a knife attack last October. He was 13 when he carried out the attack and is yet to be sentenced.

Along with a 15-year-old cousin he stabbed and seriously wounded a 20-year-old and a 12-year-old boy in the Jewish settlement neighbourhood of Pisgat Zeev in annexed east Jerusalem.

The cousin was shot dead by security forces, while Manasra was hit by a car as they fled.

Manasra, an east Jerusalem resident, was the youngest Palestinian to be convicted by an Israeli civilian court in the current round of violence.

“Rather than sending them to prison, Israel would be better off sending them to school where they could grow up in dignity and freedom not under occupation,” it said in a statement Wednesday.

“Imprisoning such young minors denies them the chance of a better future.”

A 12-year-old Palestinian girl from the West Bank, convicted of attempted murder by a military court as part of a plea bargain and sentenced to four months, was released from prison in April.