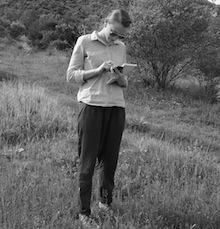 Are we simply “reallocating” water scarcity? And what will that do to stability in the MENA region? asks Lina Eklund.

The concept of “Virtual Water” has been used since the 1990s to refer to water embedded in imported food. It is a way for water scarce regions to secure their food availability, without putting more strain on their domestic water resources. The concept was developed for the Middle East region, partly to help explain why water scarcity did not directly lead to conflicts over this fundamental resource. Water scarcity did not have the expected impacts on society because the main use for water, to grow food, was outsourced to other countries with plenty of available fresh water resources.

In order to investigate these questions, we will need to introduce some more concepts related to virtual water. We need to separate between blue water, which is the fresh water stored in lakes, rivers and underground reservoirs (aquifers), and green water, which is the rain water that gets stored in the soil as soil moisture. Simply put, if you import virtual blue water, you are importing food that has been grown using irrigation, while if you import virtual green water you are importing food from rainfed crops.

In Pakistan, the looming water crisis has been described as a potentially greater threat than militancy. While water quality and access to safe drinking water is a major issue in Pakistan, the country’s available water resources have decreased from 5000 cubic meters per capita in the 1950s, to 1500 cubic meters in 2009. More than 90% of the country’s water resources are used for irrigation and other agricultural purposes, and unsustainable use of the water and land resources has caused land degradation, including salinity and water logging. Pakistan’s economy is largely based on agriculture, which comprises 20% of Gross Domestic Production (GDP), and more than 50% of the country’s exports.

While import of virtual water from already scarce countries is causing problems locally, as in the case of Pakistan, there is also a global food security perspective to consider. Being dependent on food imports may create vulnerability in the domestic food supply, as has been seen in Egypt during the global food price spikes in 2008 and 2011, and in Iraq during the international sanctions period that prohibited the export of oil, and thus restricted food imports. The looming food crisis in the Middle East is not something new, but it is a problem that needs more attention in order to create resilient and sustainable societies across the Middle East, and the world in general. Because what happens when we no longer can reallocate our water problems?