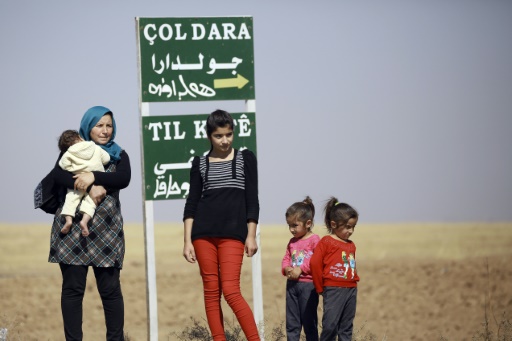 On a dusty road in northeast Syria, a woman and her four children stand beside a freshly erected green sign for Joldara, the Kurdish name of her village known for decades as Shajra.

As part of an ambitious project by Kurdish authorities, hundreds of towns and villages in northern Syria are shedding Arabised names adopted in the 1960s in favour of their traditional Kurdish ones.

In Joldara, 70-year-old Abdulrahman Hawas Hamo recounts the history of his village’s name as he fixes an old white truck in his yard.

“Joldara in Kurdish means a plain covered in trees,” he says.

“This was the name of the village before it was Arabised by the Syrian government in 1962 and changed to Shajra,” which means tree in Arabic, he explains.

A handful of modest one-room mud houses make up the village, which lies in Syria’s arid Hasakeh province against a backdrop of dry hills.

The roads into and out of Joldara are lined with new signs bearing the Kurdish names of nearby villages in both Arabic and Latin script.

Syria’s Kurds, who number about three million, have been denied basic rights for decades by the ruling Baath party.

The community was banned from speaking or teaching the Kurdish language and celebrating Kurdish feast days, and some were barred from holding Syrian nationality.

The names of hundreds of villages and towns were also Arabised in the government’s official registers — but Kurdish authorities are now reversing the procedure.

Soon after Syria’s uprising erupted in 2011, President Bashar al-Assad granted citizenship to thousands of Kurds and regime troops withdrew from Kurdish-majority areas in 2012.

Since then, Kurds have erected a parallel system of institutions, complete with schools and police units, to govern swathes of the country’s north.

“We are not renaming towns and villages — we are returning to their original, historical names,” says Joseph Lahdo, co-chair of the autonomous municipalities commission in Hasakeh.

Local committees are being consulted on the original Kurdish name of their hometowns.

“The autonomous administration then uses these names in its records and communication,” Lahdo says.

“Maps will include the original Kurdish name with the Arabised name in parentheses.”

The process is not recognised by the central government in Damascus, which has preserved the Arabised names in its own registers.

(Syrian government employees record names of towns and inhabitants at the civil registry in Amuda, some 30 kilometres west of Qamishli, a Kurdish-majority city in northeastern Hasakeh province, on October 3, 2016)

Researcher Zohrab Qado says the Arabisation of town and village names accelerated when Syria’s Baathist regime came to power in the 1960s, but had begun the previous decade under the short-lived United Arab Republic of Syria and Egypt.

Between 1978 and 1998 alone, Qado says, the names of more than 500 villages in Hasakeh province were Arabised, as well as other towns like Kobane, which became known as Ain al-Arab.

“These procedures weren’t innocent — the Arabisation was planned,” Qado tells AFP in his office, surrounded by history books in Kurdish and Arabic.

The town of Derek “was changed to Al-Malikiyah in 1957 in a formal decree in memory of Adnan al-Maliki”, the founder of Syria’s modern army.

An employee at the government’s civil register in Amuda, also in Hasakeh province, says place names were officially Arabised “in a formal letter from the ministry of interior”.

“Even newborns had to have their names approved and Arabised by security agencies,” says the employee who requested anonymity.

According to Qado, Syria’s government even distributed land around Kurdish villages to Arab farmers coming from the nearby province of Raqa in a bid to transform the demographic composition of northern Syria.

Among these, Ahmad al-Abduli’s family travelled as part of this government programme to a village now identified by its Kurdish name of Himo.

“We came from Raqa in the 1970s, and the village name was changed at the time to Hanadi. But today it has gotten its older name back,” the 45-year-old says.

Kurdish families saw the land distributions and renamings as an attempt to erase their identity.

Sheikhmous Rasho, a Kurdish farmer in his 60s, gestures excitedly in his hometown, which several weeks ago regained its original name of Girsor.

“But they changed the Kurdish names to Arabic, so they could say these were Arab villages and distance us from our Kurdish nationality and language.”

Residents of Amuda were thrilled after the municipality announced they could add Kurdish-language signs outside their shops.

Outside the store where he sells roasted cashews and other nuts, Adnan Hoshi carefully writes out “Emise Hejar” — Kurdish for “Nut shop”.

“It’s a victory for us to be able to write the name of our shops in Kurdish,” he says with a grin.