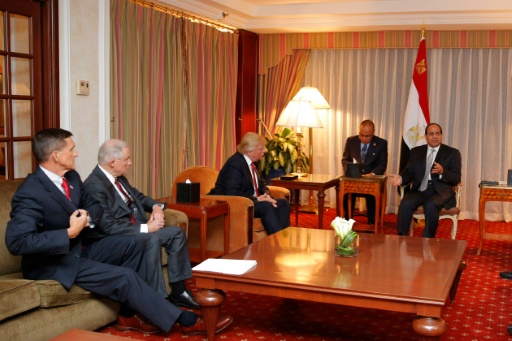 In Cairo, capital of the most populous Arab country, the US election is met with self-absorbed indifference or loathing for one, and sometimes both, candidates Hillary Clinton and Donald Trump.

The staff at a barber shop in Cairo’s middle class Dokki neighbourhood looked at one another in bemusement when asked whom they favoured for US president.

Two admitted they did not know who was running.

“We’re following what’s happening here, that’s more than enough for us,” laughed a hairdresser who gave her name as Mona, referring to Egypt’s economic crisis.

Another said he knew “little” about the election: “What I know is that Trump is hostile to Muslims.”

“I think the Arab world is consumed by its own existential crisis and few people have really thought through the implications of the next US president on their well-being,” said Hend Amry, a Libyan-American writer who lives in Qatar.

Near Cairo’s zoo, three university students shyly said they had not been following the election.

An elderly man walking by peremptorily denounced both candidates, before striding away with a toddler in tow.

“Their elections are like crap,” he said. “You remove crap and replace it with crap.”

At a cafe in Baghdad, a city much changed since the 2003 US-led invasion to remove Saddam Hussein, patrons have been following the election more closely.

Haidar Hassan, 27, blamed the Republicans for the disastrous invasion that took place under president George W Bush, but said he still supported Trump.

“Despite Iraqis’ suffering from Republican rule and their invasion, I still think Trump is tougher in fighting terrorism and countries exporting it,” he said, referring to Gulf Arab states that many Iraqis accuse of nurturing Sunni extremists.

“The Democrats are more reasonable,” countered Mostafa al-Rubaei, saying US forces withdrew from Iraq under a Democrat president — Obama.

Clinton’s past as secretary of state during Obama’s first term has been controversial in the region, with some blaming American foreign policy under her for the chaos of the Arab Spring uprisings.

Others have latched on to more bizarre accusations against the former diplomat, mirroring fringe right-wing American attacks on her.

At a Cairo grocery, shopkeeper Karem Mohamed had launched into a pensive defence of Clinton when his colleague, who had been preoccupied with filling a vat of pickled onions, interrupted.

“No she’s with the Muslim Brotherhood! She’s a collaborator,” said Mahmud Abdel Al.

Many Egyptians saw Clinton as a supporter of Islamist president Mohamed Morsi, who ruled for a year before the army, spurred by mass protests, toppled him in 2013.

His ouster, condemned by Washington as undemocratic, was followed by regular reports in the Egyptian press of an American “plot” to divide the Middle East.

Clinton addressed some of the most bizarre accusations in her book Hard Choices.

But its publication in 2014 itself set off another round of accusations in Egypt, this time that Clinton had confessed in the book that she conspired against the country.

“It included a clear confession of the plot to divide our region, relying on its agents like the Muslim Brotherhood, and Washington’s founding of extremist groups like” the Islamic State organisation, wrote one columnist in Egypt’s state newspaper Al-Ahram.

Clinton mentioned no such thing in the book.

The Egyptian leadership has not weighed in on the elections, although President Abdel Fattah al-Sisi — the former army chief who toppled Morsi — complimented Trump after meeting him and Clinton in New York separately in September.

Sisi appeared to dismiss Trump’s plan — now scaled back — to ban Muslims from entering the United States as electioneering.

“No doubt” he would make a strong leader, Sisi said in an interview with CNN.

“It is important for us to know that during election campaigns, many statements are made and many things are said,” Sisi said of Trump’s Muslim plans.

Clinton has “knowledge of the region’s issues”, he said.

Countries such as Saudi Arabia and the United Arab Emirates had opposed what they saw as Obama’s rapprochement with their arch-rival Iran over the nuclear deal, and expected his successor to be tougher.

However, Saudi writer Jamal Khasshoggi said “we have a huge experience with Clinton and she has a much better, clearer idea about foreign policy and Saudi Arabia”.

“But with Trump it’s total unpredictability.”