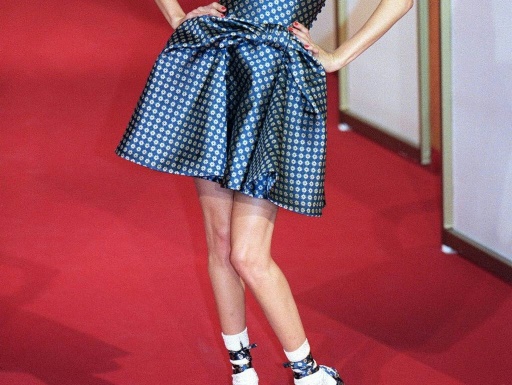 Skirt-wearing Israeli parliament staffers protested dress code rules at the building's entrance Wednesday after several of their colleagues were denied entry because their dresses were deemed too short.

Staffers say security at the Knesset, or parliament, had in recent days started to strictly enforce rules on the length of skirts, without giving a reason.

At one point on Wednesday morning, around 50 staffers and some parliament members gathered at the entrance to parliament in support of those refused entry, participants said.

Many of them wore skirts above the knee with stockings underneath on a cold and rainy day in Jerusalem.

They posted pictures and videos of themselves standing outside parliament together in protest.

One older MP, Manuel Trajtenberg, stripped down to his undershirt in protest at one point and yelled, “You’ll all have to wear burkas!” Israeli media reported.

Around 10 to 15 women were denied entry for dress code reasons on Wednesday, but some were later allowed in, staffers said.

“I’ve worn this same dress many times,” said Kesem Rozenblat, 30, an adviser to parliament member Ilan Gilon of the leftwing Meretz party who was refused entry.

“Maybe they’re scared of women’s legs, I don’t know,” she told AFP as she stood in the security hall to enter parliament along with supporters.

She said security officers did not measure her skirt, but a woman guard “simply looked me up and down and said it wasn’t appropriate”.

The issue emerged on Sunday when an aide to MP Merav Michaeli of the opposition Zionist Union was denied entry due to her skirt length.

Photos showed the aide, Shaked Hasson, wearing a blue dress that stopped above her knees, with stockings underneath.

Speaking to Israeli radio, Michaeli called the sudden strict enforcement an “attempt to impose fundamentalist standards,” referring to dress rules followed by ultra-Orthodox Jewish women requiring them to cover their arms and legs as well as their heads with a scarf.

Michaeli’s spokeswoman Naama Shahar told AFP: “We don’t know what’s the reason for it but we won’t accept it — because we just want to work.”

Knesset officials denounced the protest in a statement as an “organised provocation” and said security staff were just “doing their work to enforce a dress code that has been in place for years.”

However, women protesting outside on Wednesday said they were not told how short is too short.

“They just said we cannot go in like this today,” said Shira Amiel, a 27-year-old aide to Karin Elharar, a legislator of the opposition Yesh Atid party.

One person tweeted a photo of US First Lady Michelle Obama and Sara Netanyahu, wife of Prime Minister Benjamin Netanyahu, wearing dresses above the knee and said they would also not be allowed inside the Israeli parliament.

Parliament member Gilon, who was outside in support of his aide who had been denied entrance, told AFP: “This is not Iran.

“It’s crazy. I have a lot of very important things to do, but I spend my time with idiocy and stupidity.”

The ultra-Orthodox account for around 10 percent of the country’s population.

Segments of Israel’s Arab population, about 17.5 percent of the total, are also heavily conservative.

The chair of the Knesset committee on the status of women was among those demonstrating at the entrance to the building, wearing a black skirt that extended around knee-length.

She said she believed attitudes regarding dress had spread beyond the strictly religious communities and were becoming “mainstream”.

“We are here to say that this is not accepted,” said Aida Touma-Sliman of the Joint List, a coalition of Arab Israeli political parties.