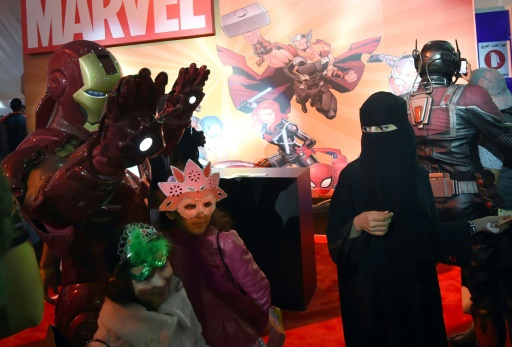 Saudis railed against "sin" and "evil" on Friday in an online backlash against the kingdom's first Comic-Con pop culture festival.

The comments reflect the challenge faced by authorities trying to gradually introduce entertainment to the Islamic kingdom.

It was one of many such comments on Thursday and Friday under hashtags including “Muslim Qibla not for dancing” and “Comic-Con is the devil worshippers’ party in Jeddah”.

Qibla is the direction in which Muslims pray, towards the Kaaba which they consider holy in Saudi Arabia’s Mecca.

On Thursday, the government’s General Authority for Entertainment said organisers of the Comic-Con event would be penalised for an unspecified violation.

The three-day festival of anime, pop art, video gaming and film-related events attracted a largely youthful crowd of thousands from February 16-18 in the Red Sea city of Jeddah.

It was part of a government initiative to bring more entertainment to Saudi Arabia, where alcohol, public cinemas and theatre are banned.

Last month the kingdom’s highest-ranking cleric, Grand Mufti Abdulaziz al-Sheikh, warned of the “depravity” of cinemas and music concerts, partly because they represent a “call for mixing between sexes”.

Comic-Con included loud rock and other music in a darkened hall.

A video purportedly from the event and circulating on social media showed Saudi women swaying — not dancing — in time to some music.

Twitter poster Abu Tawari, @bb28939936, wrote that the Entertainment Authority and its “repeated provocations” seeks “to normalise these evils amongst the people until they accept them, the worse is yet to come.”

@SAMI_ALROQE called in a Twitter post for God to take revenge “against those who made our women dance in the midst of men with no shame and our men feel no jealousy, and make it an example for others”.

Another Twitter user, Samo @tmmoohh17 said he was sad that soldiers were fighting Yemeni rebels on the kingdom’s southern border “while we commit these sins”.

Other posts objected to the “Western” tone of Comic-Con.

In its statement, the Entertainment Authority said its priority is “safeguarding values, morals and traditions” in public entertainment.

Comic-Con was organised by Saudi firm Time Entertainment and supported by the authority which, despite the violation, noted the event’s “general success in terms of content and organisation”.

Reached on Friday, a staff member at Time Entertainment declined to comment on the nature of the “violation” but said a statement would be issued.

The 31-year-old is keen to harness the energy of a young population, more than half of which is under 25.

Visitors to Comic-Con interviewed by AFP said they would welcome more such shows, and even cinemas.

The government began its entertainment push without fanfare in October when New York theatrical group iLuminate performed at the Princess Noura University in Riyadh.

Hundreds of men and women, side-by-side, hooted their appreciation and clapped to the hip hop beat.

But a performance in December by US stand-up comedian and actor Mike Epps was cancelled, its organisers said, after complaints from Islamic hardliners.