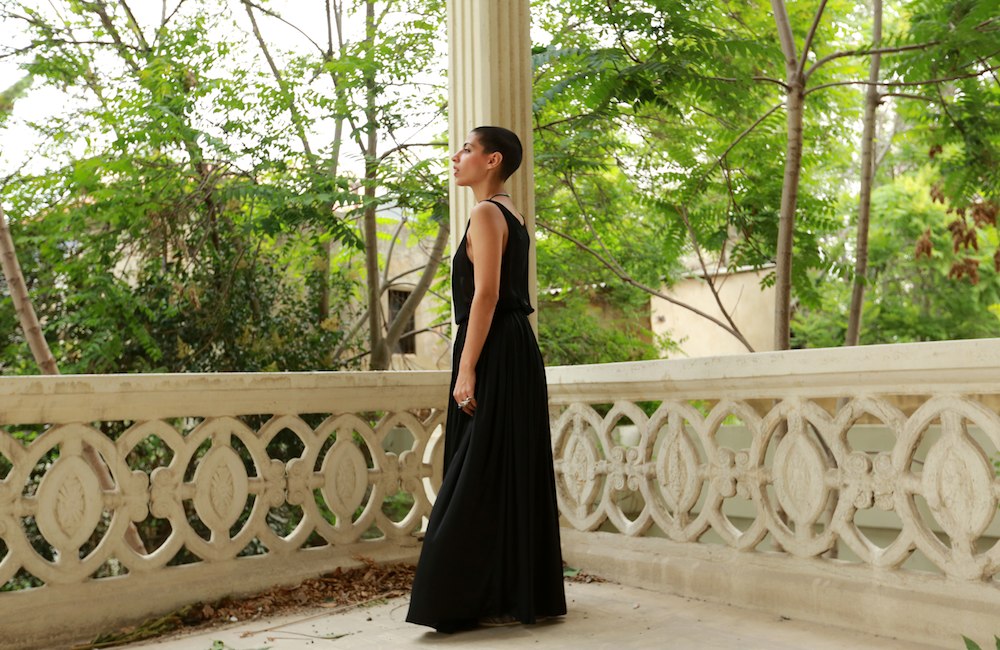 Lebanon's fashion industry is by now well established internationally. Victor Argo talks to one of its strongest voices.

It’s not only creative talent that makes a successful designer. (Of that, Lara Khoury has plenty to offer.) It is also about meeting deadlines and applying a determined work ethic. Lara Khoury has understood this lesson well at this point of her career, as she acknowledged when recently talking to the Lebanese website “Secrets of Beirut”.

So I was hardly surprised when Khoury showed up right on time for our Skype interview. Here she was, an immaculate olive-skinned beauty with eyes as big as an ocean, radiant and somewhat mysterious, sporting her trademark super short hair – we will come to that later.

The class of Lebanese fashion design came to the attention of a wider international audience when Halle Berry wore an Elie Saab dress for the Oscar ceremony in 2002. Today, Jennifer Lopez walks the red carpets wearing Zuhair Murad or Reem Acra designs, while actress Kerry Washington has joined the ranks of Elie Saab’s followers.

In Beirut Lara Khoury is the undeclared star of a very diverse scene of young Lebanese fashion designers. Many of them are women. Lara Khoury caters to a local, a regional and a growing worldwide customer base. Unlike Elie Saab and other ‘Hollywood designers’ who have a penchant for Haute Couture, Lara Khoury specializes in ready-to-wear fashion.

Ready-to-wear but not mainstream. In her collections Lara is constantly experimenting with volumes and forms and seeks to distort the feminine silhouette by constructing new curves and shapes, while at the same time keeping a hint of femininity.

“Who do you have in mind when you design?” was my first question to Lara Khoury. “Do you create for Lebanese or international customers?”

“I don’t design for a particular customer,” Lara said. “With today’s globalization, a designer can craft a collection and create for whoever they want. I rather think of the message that I want to give in the collection. And then clients from Lebanon can find my work in my studio in Beirut and other clients can find it online.”

“My decisions are based on creativity – and not on targeting a specific market,” Lara continued. “It’s not the best thing to do business-wise, I know, but I do what I do because I love it, so I don’t want to compromise on anything because of a certain client.”

Lara Khoury makes clothes with a meaning. In 2012 she released Gluttony, a collection which, with its oversized volumes, criticized the society and the people for being greedy and always wanting more and more, never satisfied with what they have. Later there was S-he, a collection celebrating the empowerment of women and making a statement against the negative attitude towards women in the Arab world. In 2016, Lara Khoury felt sad about the city she lives in, Beirut, and she designed a collection to convey this feeling, using black as the only color. “This is my way of expressing myself,” she explained, “my way of saying that I have indeed something to say. I show the people that I have a voice and that I am using it in my work.”

I was curious: with her opinionated views, what does Lara Khoury think about the rise of fundamentalist movements, anywhere in the world? In the Arab region, more women wear the hijab than forty years ago; in Lebanon alcohol is no longer served in restaurants where it used to be. “Does this trend affect your work?”

“You know,” Lara replied, “if you want to understand my clients better, and the way they live: it doesn’t really depend on their religion. Actually the only point to consider is the social standing my clientèle has. My customers belong to the upper class, they are well educated, well traveled and have a certain duty towards their appearance in public. That’s why they look for unique pieces to express themselves through the clothes they wear.”

In 2014 a survey conducted in seven Muslim-majority countries by the University of Michigan’s Institute for Social Research sought to answer the question “What style of dress is appropriate for women in public?”. The variations between the different countries were remarkable. While 49% of the Lebanese think that it is appropriate for a woman to wear her hair open and uncovered, only 3% of the Saudis and 4% of Egyptians share this opinion. They clearly favor a very traditional dress. Nevertheless, Lara Khoury has a solid customer base in Saudi Arabia and in other Gulf countries too.

“What’s your comment on women’s clothing having become the fighting arena of conservatives and liberals?”

“Well…” Lara Khoury paused and deliberated her answer for a few seconds. “People covering themselves up, hiding their faces, their eyes, to me that’s like hiding your identity. I find it dangerous, particularly if women are obligated to dress like that, because it affects the woman’s personality in so many bad ways.”

“However,” Lara went on, “if a woman likes my dresses and she also wears a hijab, she can wear the dress I designed and wear the hijab on top. I have a lot of Arab customers who do this, even in Saudi Arabia.”

When researching for this article, I stumbled across a thread of answers on the TripAdvisor website answering the question of one concerned female traveler, “What do women wear in Lebanon?” The answer is simple, one ‘expert’ said, “wear what you want and where you want”. Another responder, a woman, gave a more detailed account of women’s attire in Lebanon. “The Lebanese women are very stylish,” she wrote, “they are not into casual; you would see jeans but paired with some 4-inch heels and a beautiful top. They are always pulled together, makeup, handbag, and of course the coordinated jewelry and high heels.”

“What is the essence of beauty in Lebanon? Is there a particular ‘beauty made in Lebanon‘?” I asked Lara Khoury.

She laughed. “Well,” she said, “for the majority, beauty in Lebanon is a completely different beauty than I have in mind in my creative vision. Beauty here is known as long hair, big lips, big breasts and a big ass, a curvy silhouette, which is evidently not what I think.”

“I think that beauty is in you, it’s an inner beauty, it doesn’t really have to be physical.”

Lara Khoury’s view seems to be a minority stance in Lebanon. Sarah Mallet from the American University of Beirut concluded in her master’s thesis on young Lebanese women and plastic surgery that at least one in three Lebanese women have had some sort of plastic surgery procedure or cosmetic enhancement. Among the more affluent member of Beiruti society the number might be even higher.

From a social-psychological perspective, the way that you look is seen as the greatest form of capital in Lebanese society. The most important factor is image, how you present yourself to society. Lebanese live under the impression of being constantly observed. This means pressure.

So why did Lara Khoury cut her hair short? “Very un-Lebanese, isn’t it?”

For Lara, having this haircut is nothing new. “I was in school when I cut my hair like this for the first time, fifteen years ago,” she said. “For me it’s just an expression of forms and volume. Like if you want to wear earrings, sunglasses or hair for that matter. Back then everybody was shocked. People wouldn’t really understand and thought that I was sick. Strangers were asking me why I did it.”

In the meantime her short hair has become a brand for Lara Khoury the designer. “Indeed,” she admitted, “I started to notice that my hair was very intriguing to people. They were saying, oh this is the designer with the skin head. I also started to realize that I was inspiring other girls in Lebanon to shave their head.”

As we concluded our interview I wanted to know what would be the message of her next collection. She wouldn’t say and remained enigmatic. “My next collection is going to be out in a month,” she said, “and in a month a lot of things can change.”