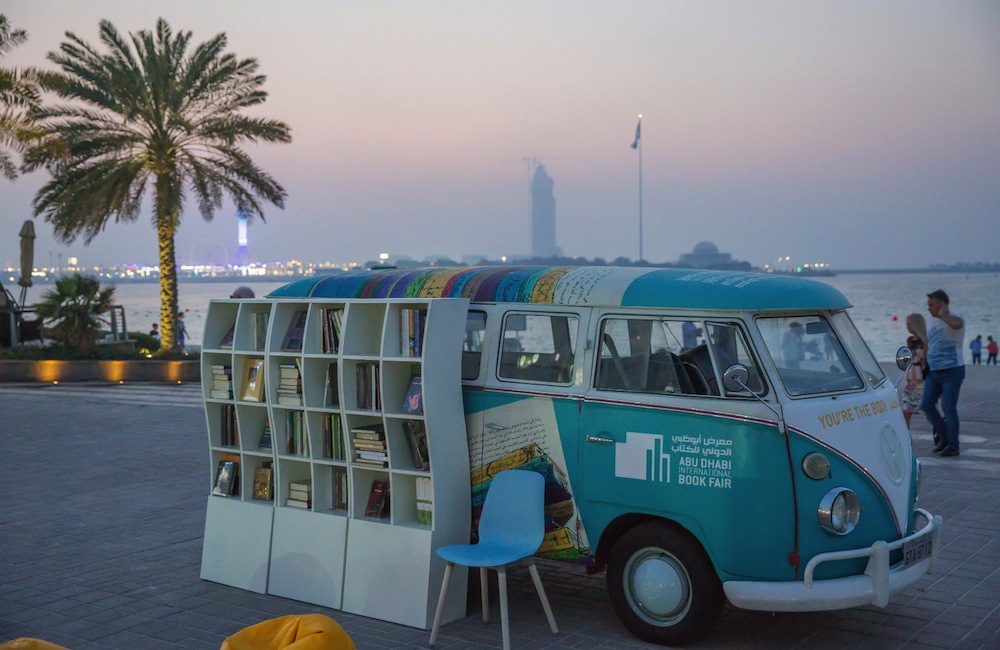 Fighting distribution problems, the steeply rising cost of books, violence, suspicion, the limitations of sidewalk sales, the difficulty in obtaining sales permits, and more, book vendors and government projects in at least three cities have taken their books out on wheels, to greater or lesser success.

The Cairo “Books Bike,” profiled on Qantara, is a one-woman project run by a young woman, Hadeer. Although the project has received high praise, it only operates in the wealthy New Cairo suburbs, as “they risk being subjected to police harassment at the moment they leave New Cairo” because the Books Bike lacks official permits. “Then there are the extreme price hikes of recent months, which are also affecting the book market and causing a sharp decline in sales, as well as the risk of the books being damaged by vehicle emissions and the elements,” Qantara reported.

The Cairo book scene has seen massive difficulties of late, from the currency fluctuations — which has sharply increased the prices of many books — to the shutdown of Gamal Eid’s popular Karama libraries:

In Abu Dhabi, meanwhile, although censorship hurdles remain, access to books continues to increase, with for instance an Abu Dhabi Book Fair “Library Truck” sitting out on the Corniche in the evenings, waiting for passersby who want to borrow a book for the day.

And in Baghdad, the Associated Press profiles Ali al-Moussawi, who reportedly “took to selling books in order to finance” the activities of his Iraqi Bookish project, “opening a bookstand in a Baghdad mall that offers a delivery service and designing shelves and other book-themed gifts.”

Lately, AP reports, al-Moussawi’s been “steering a bookstore on wheels through Baghdad’s snarled traffic, past its checkpoints, barbed wire and blast walls. Security forces often insist on searching his truck, fearing it contains explosives, and parking can be subject to prolonged negotiations.”

In contrast to the financial troubles besetting the Cairo book industry, Al-Moussawi told the AP he “has found plenty of customers. He says his business brings in a monthly income of up to $4,000, and that he has hired four paid workers.”

But, AP reported, “he must swap out his offerings depending on where he goes in the city,” and, “On one recent afternoon, al-Moussawi drove to an upscale neighborhood and parked at a mall near the University of Baghdad. There the clientele was mainly students, so he put out textbooks, novels and poetry in different languages, and celebrity biographies.”

Read the full articles about Baghdad’s book truck and Cairo’s book bike. And for more stories on Arab literature, make sure to visit Marcia’s blog ArabLit.