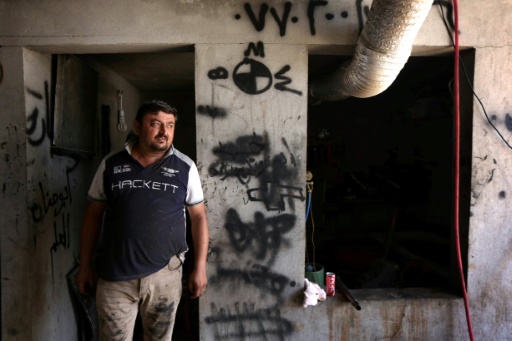 The jihadists may have been ousted from their Iraqi hometown of Mosul but many Christians like Haitham Behnam refuse to go back and trade in the stability of their new lives.

“There’s no security, no protection for Christians back there,” said the former resident of the largest city in northern Iraq.

“It’s better for us to stay here and keep our mouths shut,” said the man in his 40s who resettled in the Iraqi Kurdish capital of Arbil in 2014 after the Islamic State (IS) jihadist group seized control of Mosul.

“They came to see us in our shops. They told us: ‘We have nothing against you. If we’re bothering you, tell us.’ A week later, it was ‘Christians out!'” recalled Behnam, who used to deal in ready-to-wear clothing.

Under the brutal rule of IS, Mosul’s Christian community of around 35,000 was handed an ultimatum: convert to Islam, pay a special tax imposed on non-Muslims, or risk being executed unless they leave town.

Since the Iraqi authorities on July 10 announced their recapture of Mosul after a battle that raged for several months, tens of thousands of Christians who have rebuilt their lives in the past three years face a dilemma.

“We couldn’t go back even if we wanted to,” said Behnam, who fondly remembers “a paradise-like life” before Mosul fell under jihadist control.

His polo shirt and trousers are smeared with grease from his new life as a mechanic working in an Arbil suburb, a change he has had to undergo in order to put food on the table for his wife and two children.

“There’s no security (in Mosul). People were brainwashed over the past three years,” said Behnam, a Catholic.

“Even the children have become Daesh, they’ve been taught to slit throats,” he said using a pejorative Arabic name for IS.

A customer at the small workshop that Behnam rents was quick to agree.

“If I was a Christian, I wouldn’t go back to Mosul until its residents prove to me that they’re ready to accept me,” said Omar Fawaz, a Muslim from the east of the city.

Once the battle for Mosul was over, his parents had returned, only to find their home occupied by the victorious security forces.

“Neighbours told us to take the house of a Christian who used to live four doors down,” said the 29-year engineer.

“The mentality hasn’t changed. The imams in the mosques preach against IS… but the Salafists (radical Muslims) believe Christians have no place there.”

Another Christian Maslawi (resident of Mosul), Essam Boutros, a father of four, had to restart from scratch after having abandoned five shops and two houses in the city in 2014.

He had to sell his car to pay the first three months of rent for a shop in Arbil and used his business contacts and reputation to open credit lines with suppliers in neighbouring Turkey.

Now his impressive two-floor store displays counters loaded with perfumes and cosmetics as well as racks of brightly coloured clothes for young girls.

He hasn’t even gone back to bombed-out Mosul to see what has become of his properties.

“I want to go back for work. I’m optimistic. But without my families. It’s hard to take risks when it comes to family,” he said.

One of his shop assistants, Samaher Kiriakos Hanna, fled to Arbil from the small, mainly Christian town of Bartalla, near Mosul.

“We were scared that IS would kill us, that they would take away our daughters. We were terrorised,” said the mother of three little girls, the eldest of whom is 13.

“We saw what they did to our Yazidi sisters,” who were reduced to the status of sex slaves by IS.

Hanna, an Orthodox Christian, is now busy rebuilding her house, hopeful of returning one day, but she knows it will be a tough call whether to go back.

“We’re good here. We can find everything here. There’s food, we can rent a house, and I’ve been working for the past year,” said the 37-year-old woman, sporting a ponytail and wearing fashionable trainers.

“If they can guarantee our safety, we will go back,” she said, with a note of caution in her voice. “But what about my neighbours, my sister, my brothers. They’ve all emigrated. There’s no-one left but me.”