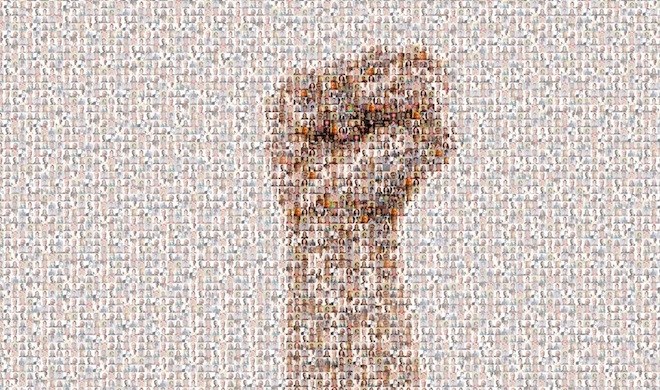 “I’ve never been in a room with so many people sentenced to death.” These were the words of one of the delegates at the International Conference on Freedom of Conscience and Expression which hosted the largest gathering of ex-Muslims in history.

Apostasy warrants the death penalty in 13 Muslim countries, while the widespread acceptance that Islam prescribes death for apostates means ex-Muslims often live in fear of danger, either at the hands of the state or from their own families and communities.

“Since Islam started, people have been killed for leaving the religion,” said Imad Iddine Habib, founder of the Council of Ex-Muslims of Morocco. “That’s why it’s important to stress that we are from Muslim backgrounds and that we left (the religion). There are so many people who don’t know about this movement, who don’t know you can leave Islam.”

Habib knew he was an atheist from a young age, telling his parents when he was 14. His family’s reaction culminated in Habib being kicked out of the house and made homeless, forced to stay with friends. He went on to found the Council of Ex-Muslims of Morocco, which led to him receiving numerous death threats. When he began to be investigated by the secret services and was asked to attend court, he fled to England as a refugee. Soon after arriving, the Moroccan courts sentenced him to seven years imprisonment in absentia.

Other prominent ex-Muslims at the event revealed the persecution they had suffered as a result of making their atheism public. Activists Bonya Ahmed and Avijit Roy were brutally attacked by Islamists at a book signing event in Bangladesh in 2015. While her husband was killed, Ahmed suffered severe head injuries and lost a finger in the attack. Armin Navabi, founder of Atheist Republic, faces death if he returns to his homeland Iran. And Palestinian writer Waleed Al Husseini was arrested and spent 10 months in prison for allegedly blaspheming against Islam on Facebook in 2010.

Ex-Muslims living in the West face danger too. A screening of Islam’s Non-Believers by filmmaker Deeyah Khan showed the lives of several British ex-Muslims, many of whom faced ostracisation or the threat of violence from their families or communities. However, it’s not only apostates who face danger; many Muslim reformers fighting for change within religious communities also find themselves being targeted by Islamic fundamentalists.

“Ex-Muslims are on the very frontline of that resistance movement, but I also say, I’m a Muslim, and there are Muslims on the frontlines of resisting fundamentalism too,” said Khan. “There are feminists, there are artists, there are activists, there are so many people who are resisting and fighting and being imprisoned and killed every single day. Just because you don’t hear about them in the West doesn’t mean there isn’t an avalanche of people who are pushing back.”

In fact, the accusation of apostasy is often used to silent dissent within the Muslim community. Ani Zonnevald, founder of Muslims for Progressive Values, highlighted the words of the former grand mufti of Al-Azhar – one of the foremost Islamic institutions in the world – who said that women who don’t wear the headscarf are apostates, while Yasmin Rehman, a Muslim women’s rights campaigner, said it was an accusation that was commonly used to smear reformers: “There are those of us within the community who stand up and challenge, and face the same death threats and same labels of apostasy as (ex-Muslims).”

The fight for women’s rights

Forced marriage, female genital mutilation and debates over the hijab (headscarf) or niqab (face veil) were just some of the issues brought up at the conference. Speakers discussed how these issues affect women in Muslim countries as well as Muslim communities in the West.

Yasmin Rehman singled out the fact that the hijab had become synonymous with being a Muslim woman, saying: “The greatest threat to women’s rights from Islam is the normalisation of fundamentalist, conservative, extremist interpretations of Islam. Where are the images of non-hijabed women? Where are those spaces for women from within the communities to be able to dissent?”

She also highlighted the fact that Western governments reinforced the conservative messages being promoted by some in Muslim communities by supporting faith schools and parallel legal systems such as shariah courts, all dressed up in the language of ‘choice’. However, for many women, this actually made it more difficult to exercise their rights.

“What are the consequences of exercising a different choice? Of removing the hijab, of dressing outside of community norms? Of choosing a marriage partner, a career, an education? It can be ostracism at one level, which is psychologically and emotionally damaging, to murder at the other extreme – whether that’s justified by religion or not. I do not recognise the Islam that is being practiced today.”

Ani Zonnevald was more positive about the progress that could be made on women’s rights, not least in the role women could play in becoming leaders within the Muslim community. She said: “It’s important that women become empowered religiously. I’m proud to call myself a woman imam. The fact that women imams are popping up all over the world is challenging patriarchy, challenging the status quo. There are people of faith working to change the system of religion from within.”

However, some questioned whether or not women’s rights could successfully be gained within a religious framework.

Sarah Haider, co-founder of Ex-Muslims of North America, said: “I deeply support Muslim progressives and people attempting to reform the religion from within. However, I do not think their ideological stance is tenable. I don’t want to argue for women’s rights starting from the Quran because that means I’m already starting from a negative. I have to work harder to catch up and I have to use the verses of the Quran or practices and traditions from the religion. That hampers my ability to argue for women’s rights.”

Many speakers highlighted the problem of the ‘regressive’ left, which denounces criticism of Islam as ‘Islamophobic’ or ‘racist’. This has the effect of curtailing freedom of expression, imposing de-facto blasphemy laws in the West. And while the right has been more defensive of the principle of freedom of speech, this is often linked to an anti-Muslim, anti-immigration agenda. Several speakers were at pains to point out the need to criticise Islam, but to avoid the bigotry of blaming all Muslims for the actions of a few.

Cemal Knudsen Yucel, co-founder and chair of Ex-Muslims of Norway, described the difficulty of discussing Islam in an environment where accusations came from all sides, starting with ‘Islamoleftists’ – Western leftists who refuse to allow criticism of the religion.

“Islamoleftists are the fifth column. When I criticise Islam, the Islamoleft attacks me and calls me anti-Muslim and associates me with the far right. The far right accuses me of taqiyya (concealing religion in the cause of Islam). Western feminists – who don’t mention child hijab, FGM, the burqa, or forced marriage – say I am anti-woman. So-called moderate Muslims accuse me of spreading hatred against Muslims and helping the far right.”

Dave Silverman, president of American Atheists, described the same phenomenon in America, where the right (usually linked to conservative Christian values), doesn’t care about instances of sexism, rape culture or homophobia – unless perpetrated by Muslims, in which case it is used to try to diminish the rights of the Muslim community or other minorities. Meanwhile, the left – which usually speaks out against bigotry – rebels against the right, seeing criticism of Islam as racist, so refuses to acknowledge problems in the Muslim community.

A call for secularism

Speakers were united on the need for truly secular societies to protect human rights, not just for ex-Muslims and women, but for minority religions too.

Karima Bennoune, UN special rapporteur in the field of cultural rights, spoke of the need to emphasise the benefits of secularism to religious as well as non-religious communities. She said: “A lot of what the UN human rights mechanisms have said about secularism has been negative, in the sense of how secularism, if not carried out in the proper way, could itself violate human rights. But very little attention has been paid to the positive aspects of secularism vis-a-vis human rights.”

Many speakers agreed that secularism itself was not enough. It had to be linked to a guarantee of the principle of free speech – which is being stifled not just in the Middle East but also in the West, where there has been a backlash against ‘hate speech’ that may hurt the feelings of minority groups.

Sarah Haider said: “Causing hurt simply can’t be the standard of what we consider acceptable or unacceptable speech. Students in particular are anti-free speech, they feel it’s a tool of the oppressor. They don’t understand that this is the only tool the truly oppressed have.”

And free speech has to extend to criticising religions and potentially offending the feelings of the religious. “It’s important to celebrate blasphemy and apostasy, because when you can be killed for it, one of the only ways to resist is to do it publicly and fight for it until it becomes normalised,” said Maryam Namazie, spokesperson for the Council of Ex-Muslims of Britain and One Law for All. “Freedom of expression is not just for believers, it includes the right to criticise religion.”

The International Conference on Freedom of Conscience and Expression took place in London from 22-24 July 2017. The whole conference was filmed – please click here to view recordings of each of the panel discussions.